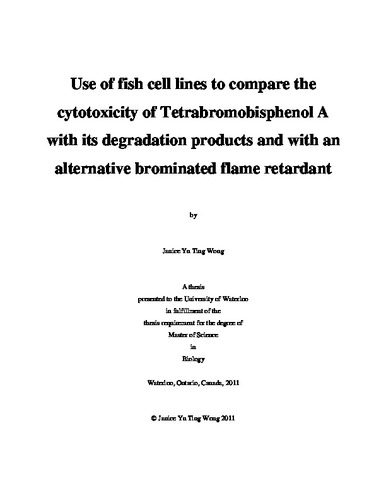 Tetrabromobisphenol A, (TBBPA or Br4BPA), is a widely used brominated flame retardant (BFR). Although TBBPA and its breakdown products been found in river sediments, the environmental impact of their contamination is largely unknown. One breakdown product of TBBPA is bisphenol A (BPA), which has been studied intensively for its toxicology because it is used in the manufacturing of plastics and leaches from food containers, water bottles and pipes. Other breakdown products of TBBPA include tribromobisphenol A (Br3BPA), dibromobisphenol A (Br2BPA), and monobromobisphenol A (BrBPA) but little is known about their toxicology. Since TBBPA is toxic, there is a need to search for an alternative BFR, with one being tetrabromobisphenol A bis(2,3-dibromopropylether) or TBBPA-DBPE. However, almost nothing is known about the toxicology of this compound. Hence, two rainbow trout cell lines, RTL-W1 from liver and RTgill-W1 from gill, were used to evaluate the cellular toxicity of TBBPA, BPA, BrBPA, Br2BPA, Br3BPA and TBBPA-DBPE. The cells were exposed to these compounds for 24 h in the basal medium, L-15, to study their cytotoxicity and in L-15 with fetal bovine serum (FBS) to evaluate their capacity to induce 7-ethoxyresorufin o-deethylase (EROD) activity. Viability was measured with three fluorometric indicator dyes: Alamar Blue (AB) for metabolism, 5-carboxyfluorescein diacetate acetoxymethyl (CFDA AM) for cell membrane integrity, and Neutral Red (NR) for lysosomal activity. The concentrations causing a 50 % reduction in viability (EC50) as measured with these three dyes were used to compare the relative cytotoxicity of these chemicals. For both cell lines and with all viability endpoints, TBBPA was the most cytotoxic, with EC50s ranging from 2.33 to 3.11 ug/ml. BPA, BrBPA, Br2BPA, and Br3BPA also caused dose-dependent declines in cell viability but showed no consistent order of potency. None of the six compounds induced EROD activity, which suggests that they do not activate the aryl hydrocarbon receptor (AhR). Regardless of the endpoint or cell line, TBBPA-DBPE was not cytotoxic. This suggests that, from a toxicological perspective, this compound may be a suitable replacement for TBBPA as a BFR. BPA stood out from the other compounds in two regards. BPA caused a dose-dependent decline in cell viability for cultures in L-15 with FBS, whereas for the other compounds, little or no change in viability was seen in cultures with FBS. BPA elicited a decline in the ability of cells to reduce AB almost immediately upon its addition to cultures in a simple buffer, whereas as for other compounds a decline took time to develop. These results suggest that BPA exerts its cytotoxicity by a different mechanism different from the other compounds.

Janice Wong (2011). Use of fish cell lines to compare the cytotoxicity of Tetrabromobisphenol A with its degradation products and with an alternative brominated flame retardant. UWSpace. http://hdl.handle.net/10012/6107