On the Use of MODIS for Lake and Land Surface Temperature Investigations in the Regions of Great Bear Lake and Great Slave Lake, N.W.T. 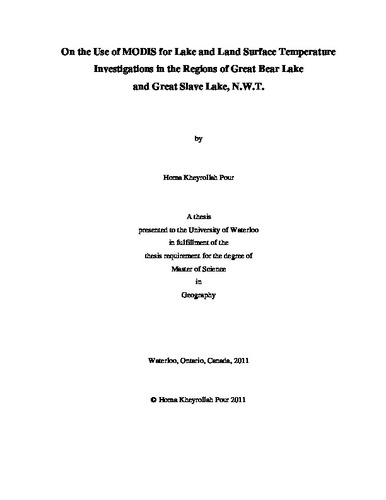 Lake surface temperature (LSTlake) can be obtained and studied in different ways: using in situ measurements, satellite imagery and modeling. Collecting spatially representative in situ data over lakes, especially for large and deep ones, is a real challenge. Satellite data products provide the opportunity to collect continuous data over very large geographic areas even in remote regions. Numerical modeling is also an approach to study the response and the role of lakes in the climate system. Satellite instruments provide spatial information unlike in situ measurements and one-dimensional (1-D) lake models that give vertical information at a single point or a few points in lakes. The advantage of remote sensing also applies to land where temperature measurements are usually taken at meteorological stations whose network is extremely sparse in northern regions. This thesis therefore examined the value of land/lake surface (skin) temperature (LSTland/lake) measurements from satellites as a complement to in situ point measurements and numerical modeling. The thesis is organized into two parts. The first part tested, two 1-D numerical models against in situ and satellite-derived LST measurements. LSTlake and ice phenology were simulated for various points at different depths on Great Slave Lake (GSL) and Great Bear Lake (GBL), two large lakes located in the Mackenzie River Basin in Canada’s Northwest Territories, using the 1-D Freshwater Lake model (FLake) and the Canadian Lake Ice Model (CLIMo) over the 2002-2010 period. Input data from three weather stations (Yellowknife, Hay River and Deline) were used for model simulations. LSTlake model results are compared to those derived from the Moderate Resolution Imaging Spectroradiometer (MODIS) aboard the Earth Observing System Terra and Aqua satellite platforms. The main goal was to examine the performance of the FLake and CLIMo models in simulating LSTlake and ice-cover under different conditions against satellite data products. Both models reveal a good agreement with daily average MODIS LSTlake from GSL and GBL on an annual basis. CLIMo showed a generally better performance than FLake for both lakes, particularly during the ice-cover season. Secondly, MODIS-derived lake and land surface temperature (LSTland/lake) products are used to analyze land and lake surface temperature patterns during the open-water and snow/ice growth seasons for the same period of time in the regions of both GBL and GSL. Land and lake temperatures from MODIS were compared with near-surface air temperature measurements obtained from nearby weather stations and with in situ temperature moorings in GBL. Results show a good agreement between satellite and in situ observations. MODIS data were found to be very useful for investigating both the spatial and temporal (seasonal) evolution of LSTland/lake over lakes and land, and for improving our understanding of thermodynamic processes (heat gains and heat loses) of the lake/land systems. Among other findings, the MODIS satellite imagery showed that the surface temperature of lakes is colder in comparison to the surrounding land from April-August and warmer from September until spring thaw.

Homa Kheyrollah Pour (2011). On the Use of MODIS for Lake and Land Surface Temperature Investigations in the Regions of Great Bear Lake and Great Slave Lake, N.W.T.. UWSpace. http://hdl.handle.net/10012/6100