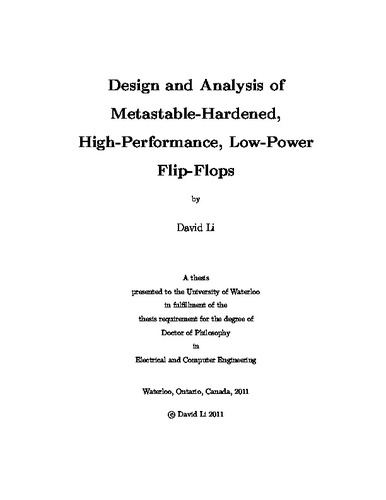 With rapid technology scaling, flip-flops are becoming more susceptible to metastability due to tighter timing budgets and the more prominent effects of process, temperature, and voltage variation that can result in frequent setup and hold time violations. This thesis presents a detailed methodology and analysis on the design of metastable-hardened, high-performance, and low-power flip-flops. The design of metastable-hardened flip-flops is focused on optimizing the value of τ mainly due to its exponential relationship with the metastability window δ and the mean-time-between-failure (MTBF). Through small-signal modeling, τ is determined to be a function of the load capacitance and the transconductance in the cross-coupled inverter pair for a given flip-flop architecture. In most cases, the reduction of τ comes at the expense of increased delay and power. Hence, two new design metrics, the metastability-delay-product (MDP) and the metastability-power-delay-product (MPDP), are proposed to analyze the tradeoffs between delay, power and τ. Post-layout simulation results have shown that the proposed optimum MPDP design can reduce the metastability window δ by at least an order of magnitude depending on the value of the settling time and the flip-flop architecture. In this work, we have proposed two new flip-flop designs: the pre-discharge flip-flop (PDFF) and the sense-amplifier-transmission-gate (SATG) based flip-flop. Both flip-flop architectures facilitate the usage in both single and dual-supply systems as reduced clock-swing flip-flop and level-converting flip-flop. With a cross-coupled inverter in the master-stage that increases the overall transconductance and a small load transistor associated with the critical node, the architecture of both the PDFF and the SATG is very attractive for the design of metastable-hardened, high-performance, and low-power flip-flops. The amount of overhead in delay, power, and area is all less than 10% under the optimum MPDP design scheme when compared to the traditional optimum PDP design. In designing for metastable-hardened and soft-error tolerant flip-flops, the main methodology is to improve the metastability performance in the master-stage while applying the soft-error tolerant cell in the slave-stage for protection against soft-error. The proposed flip-flops, PDFF-SE and SATG-SE, both utilize a cross-coupled inverter on the critical path in the master-stage and generate the required differential signals to facilitate the usage of the Quatro soft-error tolerant cell in the slave-stage.