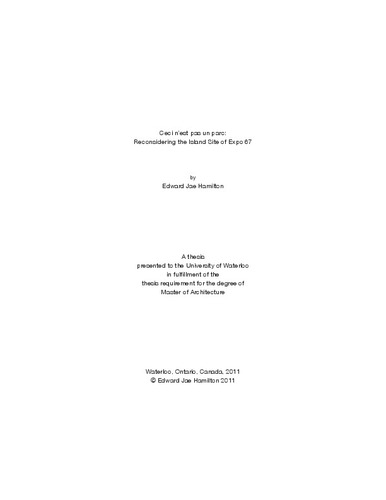 This thesis examines the landscape of Expo 67, in both its original and current state, and diagnoses a set of design and programming issues. In the mid-1960s, the city of Montreal undertook a vast construction project in the St. Lawrence River, which doubled the size of the existing Ile-Sainte-Hélène and entirely created the adjacent Ile-Notre-Dame. Together, these new islands provided the site for Expo 67. The world exhibition has since been dismantled and the site now contains a patchwork of landscape design proposals. The construction of the islands is investigated relative to the earthwork practices that were emerging at the time they were built. Adjacent art practices are subsequently mined to develop a response to the present state of the site. This somewhat rhetorical design method intends to provoke discussion of the best use of the site and attempts to recover the specific nature of the place – a once densely built ground, partially conceived as a laboratory of ideas for the future of the city – now obscured beneath a relatively generic mantle of picturesque landscaping. The proposed design features a series of large-scale greenhouse structures arrayed in relation to the site’s existing metro station, connecting the present landscape’s features in an integrated network with sustainable elements. This network aims to restore the civic status of the park, to promote the use of the territory as an experimental ground, and to strengthen the dialectic between the site and the culture of the city that created it.