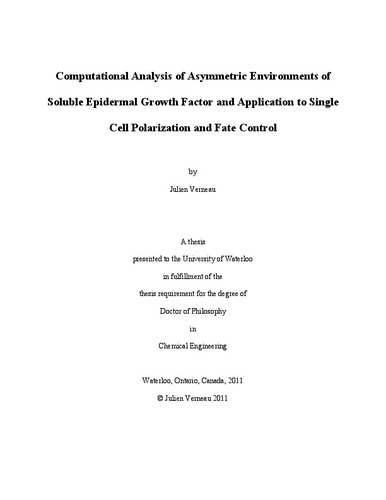 Stem and progenitor cells have the ability to regulate fate decisions through asymmetric cells divisions. The coordinated choice of cell division symmetry in space and time contributes to the physiological development of tissues and organs. Conversely, deregulation of these decisions can lead to the uncontrolled proliferation of cells as observed in cancer. Understanding the mechanisms of cell fate choices is necessary for the design of biomimetic culture systems and the production of therapeutic cell populations in the context of regenerative medicine. Environmental signals can guide the fate decision process at the single level but the exact nature of these signals remains to be discovered. Gradients of factors are important during development and several methods have been developed to recreate gradients and/or pulses of factors in vitro. In the context of asymmetric cell division, the effect of the soluble factor environment on the polarization of cell surface receptors and intracellular proteins has not been properly investigated. We developed a finite-element model of a single cell in culture in which epidermal growth factor (EGF) was delivered through a micropipette onto a single cell surface. A two-dimensional approach initially allowed for the development of a set of metrics to evaluate the polarization potential with respect to different delivery strategies. We further analyzed a three-dimensional model in which conditions consistent with single cell polarization were identified. The benefits of finite-element modeling were illustrated through the demonstration of complex geometry effects resulting from the culture chamber and neighboring cells. Finally, physiological effects of in vitro polarization were analyzed at the single cell level in HeLa and primary cells. The potential of soluble factor signaling in the context of directed fate control was demonstrated. Long term phenotypical effects were studied using live-cell imaging which demonstrated the degree of heterogeneity of in vitro culture systems and future challenges for the production of therapeutic cell populations.