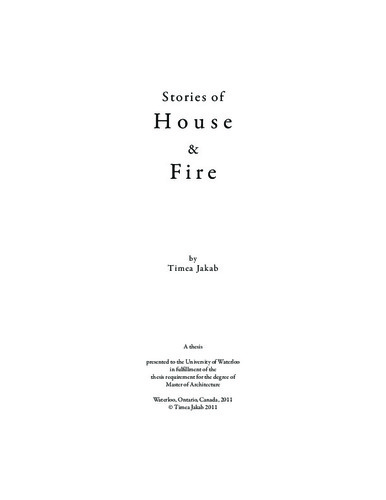 For Gottfried Semper fire was the “first and most important, the moral element of architecture.” The symbol of the soul of the city and of the house, it has become a fundamental element in the rituals of urban and domestic foundation. We recognize fire as a sensational and tremendous element, and we are captivated by it. The attraction to an object leads to desire; in the case of fire, to own it, we need to restrain it. This desire is trepidatious, acknowledging the devastating capability of fire. Fire is a threat, yet we invite it into our homes. Fire is intimately associated with construction not only in our immediate histories, but also in our myths of origin. In the classical world, fire was worshipped within the city and the home. For Greeks and Romans, the sacred fire in the centre of the city was the primary altar, the origin of its identity and the seed for religious life. Hestia, the Greek goddess of the domestic hearth, became a symbol of community and power. And the tradition endures: For instance, Frank Lloyd Wright’s homes revolve around the hearth, as both a thermal and a compositional focus around which life within the home is created. The integral flame burning deep in the heart of the home brought Wright a deep sense of comfort. Centering our homes on fire involves a paradox; fire, whether transforming our food or warming us, is also a menace. As fundamentally as the house was built around fire, it can also be destroyed by fire. Fire grows, reproducing and dividing, all the while losing ritual and mythical content. The multiplication of fire diminishes its symbolic value; a loss of value comes with increase. Untamed, violent, fire is ousted from its central place in the home. With the Great Fire of London in 1666, our understanding of the destructive capabilities of fire were institutionalized, along with policy to restrain it; we realized we had to implement a broader level of control. The story of the hearth is a satire; an account of our attempt to domesticate the magical and ethereal. From these attempts, we are left unsure of our true perceptions of fire. How do we negotiate our simultaneous innate temptation with our fear of fire, our inexplicable fascinations and our corresponding trepidations? Storytelling is deeply rooted in the gathering around a fire, and the story of architecture ultimately begins with fire. Through the selection of ten stories that chronicle of the relationship between fire and the home, we can examine our ineffable relationship with fire, vacillating between function and symbol, coloured by with themes of fascination, temptation and fear.