The Ambitious City: Stimulating Change through the Urban Artifact 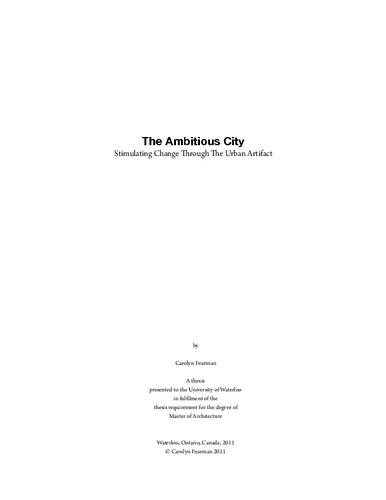 In the late twentieth century, global economic forces changed the face of many North American cities. Cities which were built upon industry, that had provided both job certainty and economic vitality, faced questions of survival in response to shrinking population and urban blight. Unprepared for these drastic changes and unable to address them survival gave way to resignation. Buffalo, New York is an example of a once successful and vital city that continues to experience de-population due to the collapse of its industries. The collapse not only created economic repercussions but also effected the city’s built environment. Many of the Buffalo’s urban monuments, testaments to the ambition of the city, now sit empty; as do the working class neighbourhoods that surround them. The Thesis examines the role which architecture can play in understanding, strategizing and re-envisioning the life of deteriorating cities. Focusing on the City of Buffalo, the design centers on the New York Central Terminal. It proposes a radical repurposing of the Terminal to create a new urban hub which will spur the re-building of the city’s urban fabric. The design outlines a staged 25 year strategy for the de-construction of sparse areas and the strengthening of critical urban networks, thus creating a strong framework upon which a new physical fabric for the city can build and develop overtime. The Terminal, once a significant rail hub is re-envisioned as a revitalized hub for the new city. A key connective point within this urban framework, it encapsulates a variety of program moved from the surrounding neighbourhood to the site. The Terminal will act as an architectural catalyst for change, working within the larger urban strategy to spur a natural re-growth and densification of the city. The thesis presents the radical re-thinking of the architect’s role in the twenty-first century. As current economies and industries face change the urban climate is adapting from one of constant growth to one of strategic re-use. Skeletons of once successful cities lay across the North American landscape. Their urban artifacts: the grain mill, steel manufacturing plant and rail yards, which once supported whole cities as both providers of employment and definers of cultural identity, now stand as empty reminders of a prosperous past. The Thesis shows how these buildings , like the New York Central Terminal can be given a renewed cultural significance and powerful roles within the revived urban life of their cities.