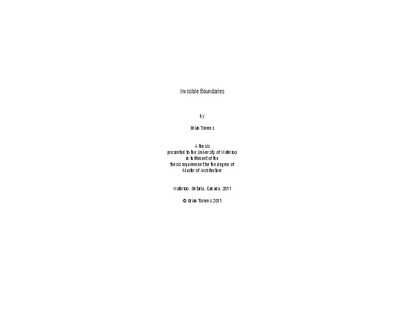 Within Buenos Aires there exists a boundary between the formal, planned developments of the middle class and the informal, organically-developed self-built housing of the poor. Villa 31, an informal settlement located near the heart of the city, contrasts directly with the skyscrapers of the Argentinean capital’s financial and political centre. The tension between the formal and informal cities creates a stigmatization of the residents of Villa 31, essentially barring the possibility of its integration into the city. The boundary between Villa 31 and Buenos Aires exists not only in the physical space between the two, but more importantly in the collective imagination of the city’s inhabitants. This is a story of the space between Villa 31 and Buenos Aires. It chronicles the attempts at crossing that boundary and the obstacles encountered. As a means of presenting the work to a broad audience, the story was written as a comic book. The first-person narrative helps to immerse the reader in the story while presenting the full complexity of the problem through a personal account. The story reveals the complex relationship between Villa 31 and Buenos Aires as a means of understanding the invisible boundary between the two. The core of the research consists of two months of field work in Buenos Aires conducted through October and November of 2009. Journal entries, photographs, conversations and first-hand experiences were transformed into a comic book that tells a story of the invisible boundary between Villa 31 and Buenos Aires.