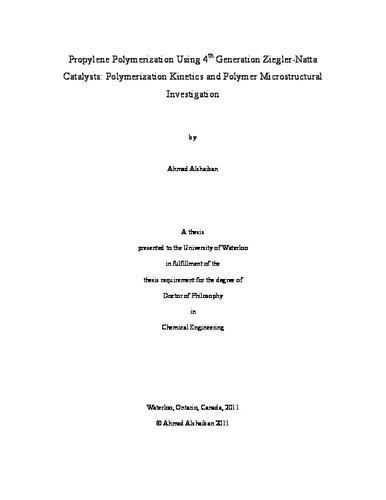 A systematic study of propylene polymerization using a 4th generation Ziegler-Natta catalyst is presented in this thesis. The apparent kinetic rate constants for propylene polymerization were estimated in the presence and absence of hydrogen and/or donor. The estimated activation energies for activation, propagation, and deactivation were found to be close to values previously reported in the literature for similar catalysts. The polypropylene samples were characterized using high-temperature gel permeation chromatography (GPC), carbon-13 nuclear magnetic resonance (13C NMR), and crystallization elution fractionation (CEF). The effect of hydrogen and external electron donor on polypropylene microstructure was investigated at two polymerization temperatures. In addition to the expected electron donor positive effect on tacticity, hydrogen was also found to increase polypropylene tacticity. The effect of changing these polymerization conditions on molecular weight and polydispersity was also investigated. Finally, CEF profiles show how the distribution of polypropylene crystallizability changes by adding hydrogen and electron donor to the reactor. The concentrations of hydrogen and external donor were also varied to study their effect of polymerization kinetics and polymer microstructure. The estimated activation energies were close to those found in the first part of this investigation in the presence and/or absence of donor and hydrogen. A polypropylene microstructural study showed a positive effect of hydrogen concentration on mmmm pentad at low donor concentration, likely due to an increase in stereoselectivity of the aspecific sites by hydrogen. However, increasing donor concentration over a given threshold seems to transform the aspecific sitess into stereospecific sites that are no longer significantly affected by hydrogen. These experimental results were compared to a previously developed Monte Carlo model and found to agree with the trends predicted by simulation. Finally, the effect of diisopropyldimethoxysilane (P), n-propyltrimethoxysilane (N), paraethoxyethylbenzoate (PEEB), and dicyclopentyldimethoxysilane (D) external donors on catalyst activity and stereoselectivity was investigated. P and D donors were more stereoselective than N and PEEB donors; however, D donor had the best activity among all donors investigated. Therefore, D donor was mixed with PEEB to combine its high activity with the self-extinguishing properties of PEEB. The D/PEEB 90/10 (mol/mol) mixture generated a catalyst with good stereoselectivity but poor activity. When the ratio was increased to 95/5 and 98/2, the resulting catalyst had high activity and good stereoselectivity. Interestingly, the D/PEEB combination with just a small fraction of PEEB has a positive effect on the catalysts activation term which may decrease polymerization costs with this system.