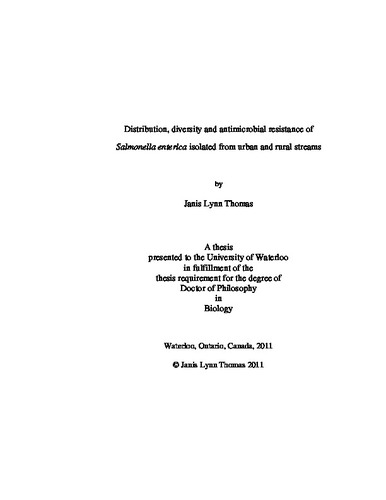 This study presents the spatial and temporal variability of Salmonella enterica in urban and rural streams in a model watershed (Grand River watershed, Ontario, Canada), and examines the antimicrobial resistance (AMR) and genetic diversity of various serotypes. Using a swab collection method and various media types, Salmonella were detected in 78.4% of samples between November 2003 and July 2005. A diverse range of Salmonella serotypes (n=38) were isolated from water. Predominant serotypes and phagetypes (PT), including S. Typhimurium PT 104 and S. Heidelberg PT 19, and the proportion of isolates demonstrating AMR (33%), was similar to those for humans and farm animals locally and across Canada, a trend not commonly reported. There was a greater diversity of serotypes and AMR profiles in isolates from the urban stream compared to the rural/agricultural streams. Plasmid-borne resistance was observed in 28.6% of AMR isolates, with two different plasmids responsible for resistance; the TEM-1 plasmid (8.1Kb plasmids carrying blaTEM-1, responsible for ampicillin resistance) and CMY-2 plasmid (95.5Kb plasmids carrying blaCMY-2, responsible for 3rd generation cephalosporin resistance). CMY-2 plasmids were only found in the urban stream and did not create a biological burden under non-selective conditions, indicating the long-term permanence of these plasmids. Seasonal differences in the overall diversity of serotypes and predominance of serotypes of human health significance (S. Typhimurium and S. Heidelberg) were observed. The lower occurrence of S. Typhimurium and S. Heidelberg in February and March was not the result of lower survival of these serotypes at low temperatures. Peaks in occurrence of S. Typhimurium and S. Heidelberg in the summer and spring, respectively, were pronounced in the rural/agricultural streams, as opposed to the urban stream. Pulsed-field gel electrophoresis and plasmid-typing revealed diversity within multiple drug resistant S. Typhimurium PT 104 isolates, indicating genetic differences among tributaries. The ubiquitous nature of Salmonella in water and the predominance of serotypes/phagetypes of human or veterinary health significance suggest that environmental exposure through consumption or contact with contaminated water is plausible. These streams may act as a vehicle for the dissemination of these organisms and their resistance genes between different hosts or environments.