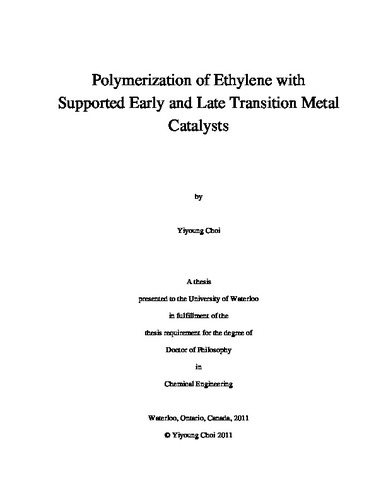 Single-site catalysts revolutionized the polyolefin manufacturing industry and research with their ability to make polymers with uniform microstructural properties. Several of these catalysts are currently used commercially to produce commodity and differentiated-commodity resins. The key to their rapid success and industrial implementation resides in the fact that they can be used without major modifications in the polymerization reactors that previously used heterogeneous Ziegler-Natta and Phillips catalysts. Since most of these industrial processes use slurry or gas-phase reactors, soluble single-site catalysts must be supported on adequate carriers that ensure not only high activity, but also the formation of polymer particles with the proper morphology and bulk densities. Metallocene catalysts have been supported on a variety of carriers, but supporting late transition metal catalysts has not been investigated in detail, despite their very interesting properties such as tolerance to polar comonomers and impurities, activity in the absence of MAO, and the formation of short chain branches by the chain walking mechanism. The research work of this PhD thesis intends to fill this gap, by developing supported late transition metal catalysts with high catalyst activities towards ethylene polymerization and good polymer particle morphology. The effects of catalyst structure and polymerization conditions on silica-supported nickel diimine catalysts are discussed in Chapter 3. Compared with the equivalent homogeneous catalysts, the covalently-attached supported catalysts had high activities, produced spherical polyethylene particles with good morphologies, and polyethylene with higher melting temperatures, higher molecular weight averages, and broader molecular weight distributions. Borates used as internal activators during the synthesis of these supported catalysts successfully activated the nickel diimine complexes. In Chapter 4, MgCl2/alcohol adducts are recrystallized with alkylaluminum compounds and used as catalysts supports for nickel diimine complexes functionalized with amine groups. Polymerization results were compared with those of the equivalent SiO2-supported nickel diimine catalysts. MgCl2-based supported nickel diimine catalysts had high catalyst activity without the use of activators, and it was possible to control polymer molecular weight averages by changing the support composition. Although linear low density polyethylene made with metallocenes offers superior mechanical properties such as excellent toughness, impact strength and clarity, it suffers from poor processability. To overcome some of these disadvantages, Chapter 5 introduces methods to produce bimodal polyethylene resins using supported hybrid early and late transition metal catalyst systems. The presence of short chain branches in the higher molecular weight component is attributable to the incorporation of alpha-olefin molecules by the metallocene sites, while the nickel diimine catalyst sites produce chains with a distribution of short chain branch sizes through the chain walking mechanism. Finally, in Chapter 6 supporting a nickel diimine catalyst onto organo-modified montmorillonite (MMT) to prepare polyethylene/clay nanocomposites through in-situ polymerization is described. The thermal properties and crystallinity of the nanocomposites could be controlled by varying the fraction of MMT in the nanocomposite, and the dispersion of the MMT layers in the polymer matrix were characterized by scanning electron microscopy (SEM) and transmission electron microscopy (TEM).