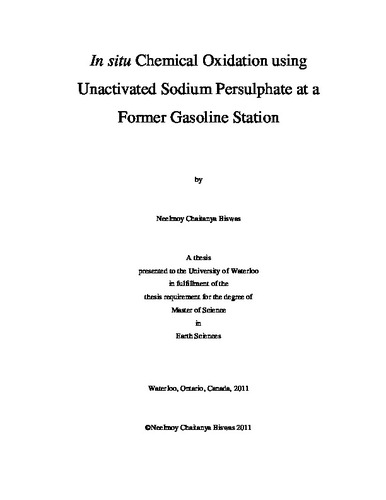 The contamination of aquifer systems by petroleum hydrocarbons is a global problem. Underground storage tanks used for storing these hydrocarbons often leak, resulting in subsurface contamination. The hazards associated with petroleum hydrocarbon contamination are mainly attributable to the BTEX compounds, namely benzene, toluene, ethylbenzene and xylenes together with trimethylbenzenes (TMBs) and naphthalene due to their potential to impact human health and the ease with which they can enter the groundwater system. In situ chemical oxidation (ISCO) is the delivery of strong chemical oxidants to the subsurface for the purpose of treating organic contaminants. ISCO can be an effective way to remediate organic contaminants from the soil and groundwater. Sodium persulphate is one of the newer oxidants to gain widespread use in treating petroleum hydrocarbon contamination, though without being fully understood. This investigation tested the ability of unactivated sodium persulphate in treating dissolved phase and residual BTEX contamination through bench-scale laboratory tests and a pilot-scale field study. A degradation potential batch reactor test was carried out to assess the efficacy of unactivated sodium persulphate in oxidizing petroleum hydrocarbons present in contaminated groundwater as well as its effect on aquifer material from a field site. This test was carried out at a sodium persulphate concentration of 20 g/L. Results from this test did not follow the expected first-order degradation, and so subsequent experiments were carried out using a sodium persulphate concentration of 100 g/L. A test to determine the degree of interaction between the oxidant and aquifer material was also conducted. It was found that the degree of natural oxidant interaction for the field site in question was very low. 1000 kg of sodium persulphate was dissolved in nearly 10,000 L of water and injected into the subsurface. Electrical conductivity (EC), pH, sodium, persulphate, sulphate and BTEX were all monitored during the subsequent 152-day post-injection monitoring period. An empirical relationship was determined between EC and the concentration of sodium in groundwater. This enabled the use of EC as a real-time tracer to track the progress of the injectate. Field results supported predictions based on a simulation model that density-driven flow would play an important role in the delivery of the injectate. A portion of the injectate was believed to have been missed by the monitoring network. Areas that did show elevated tracer results in some cases showed a decrease in BTEX concentrations. Results were categorized in four ways. The first category had wells that showed strong evidence of injectate presence but little to no change in BTEX levels. The second category was comprised of wells that showed a reduction in BTEX levels along with the presence of injectate. BTEX levels in some wells rebounded towards the end of the study period. The third category consisted of wells that showed the presence of dilute injectate but did not show any reduction in BTEX concentrations. The fourth and final category was of wells that showed no evidence of having been affected by the injectate in any way. BTEX levels were the same as background. The oxidation of BTEX by unactivated sodium persulphate was found to be successful, though the vagaries of oxidant delivery and field sampling made difficult the accurate determination of the degree of success.