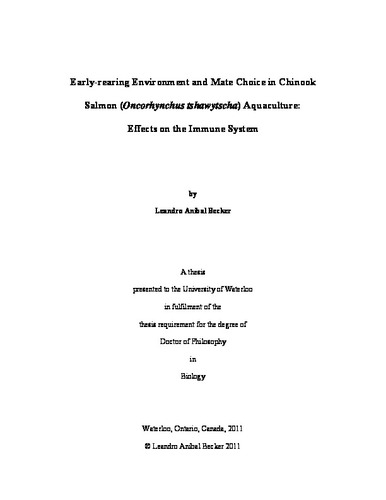 Canada is the fourth largest producer of farmed salmon in the world, with Atlantic salmon being the major species cultivated. Paradoxically British Columbia (BC), which borders the Pacific Ocean, is the major producer province where Atlantic salmon was introduced in the mid-80’s. Escaped salmon may constitute a threat to natural populations of Pacific salmon as they compete for the same resources such as food and spawning territory. A potential solution to the aquaculture industry would be to further develop the aquaculture of native species in the region. The work presented here used semi-natural spawning channels to evaluate the effects of breeding strategies and early-rearing environments on the immune performance of Chinook salmon. Breeding strategy was tested analyzing artificial hatchery practices versus semi-natural propagation in spawning channels. Early-rearing environmental assessment contrasted indoor plastic hatchery tanks with outdoor gravelled-bottom spawning channels. A disease challenge involving over 1400 fish showed interaction effects between breeding strategy and rearing environment. Fish artificially mated presented a disease susceptibility influenced by the rearing environment. The contrary occurred in the offspring of self-breeding brood stock in the spawning channels, as no differences were observed in their susceptibility to the disease regardless of rearing environment. Monitoring of anti-Vibrio anguillarum antibodies during the disease challenge and a follow up of the survivors in sea net pens further confirmed the interaction between breeding strategy and rearing environment. Gene expression in pre- and post-infected artificially propagated fish showed differential gene expression when analyzed with a 695-gene cDNA microarray for Chinook salmon. Genotyping of major histocompatibility (MH) class II β1 alleles showed a tendency of a higher heterozygosity in survivors as expected, as well as a general tendency of a higher heterozygosity in semi-naturally propagated fish. The latter is likely a direct consequence of MH-linked mate choice, which was recently described in Chinook salmon (Neff et al., 2008). To further characterize the mating system of Chinook salmon in the spawning channels, brood stock were genotyped at 12 microsatellite loci. Females and males were found to mate randomly with regards to genetic pairwise relatedness, but they tended to mate with fish of similar condition as revealed by their pairwise differences in Fulton’s condition factor. This work demonstrated that genotype-by-environment interactions can modify the disease resistance of Chinook salmon. More importantly, these effects were seen after just one round of semi-natural spawning of domesticated hatchery fish, suggesting that further studies on spawning channels may highlight other hidden benefits. Therefore, breeding strategy and early-rearing environment should be considered when propagating cultured stocks. The use of more natural propagation methods such as spawning channels could improve the immune performance of Chinook salmon and help to expand the aquaculture of this native species in BC.