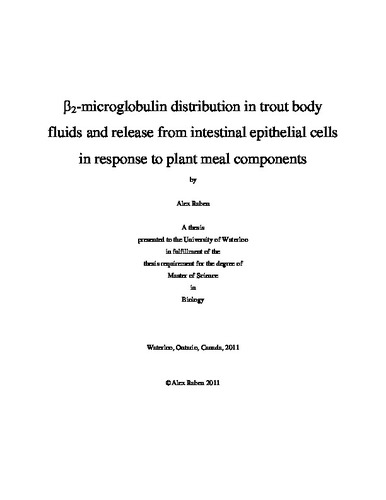 β2-microglobulin (β2m) exists free of the major histocompatibility complex class I (MHC I) receptor in many bodily fluids. The amount of protein present in these fluids has been found to be a useful prognostic marker for various diseases but outside of its practical value not much is known about this form of β2m. In fish, soluble β2m has not been studied at all. Another unknown in fish is the effects that plants lectins might have on naturally carnivorous species in aquaculture. These plant proteins which bind to specific sugar groups found on cells have been shown to have a multitude of gastrointestinal and immune effects in mammals and can be found in the plant products being fed to carnivorous, cultured fish making them possible toxicants. The two studies of this thesis set out to pioneer knowledge on these subjects using rainbow trout as a model. The first investigation inspected the various body fluids of these fish for their free β2m content. Soluble β2m was found to be present in the plasma, the seminal fluid, ovarian fluid, and the mucus of the skin and intestines. This distribution shows that β2m could indeed make a good biomarker, not only for disease but also for pheromone release and alludes to some possible functions of soluble β2m while opening the way for future research on this form of the protein. The second study looked at the effects of lectins on the gut of rainbow trout by treating RTgutGC, an intestinal epithelial cell line derived from trout, with plant lectins from wheat (WGA) and soybean (SBA), among others. This study found WGA to be a potent inducer of morphological and cytotoxic effects in these cells while other lectins and plant factors were not. WGA was also observed to effect the expression of β2m and the α-chain of the MHC I receptor. This work suggests WGA ingested by trout through the wheat in their diet might be causing them harm and should be studied further. It is also interesting that both studies related β2m to the intestines of trout. This could allow soluble β2m to serves as a marker of WGA’s effect or for WGA to aid in the study of free β2m.