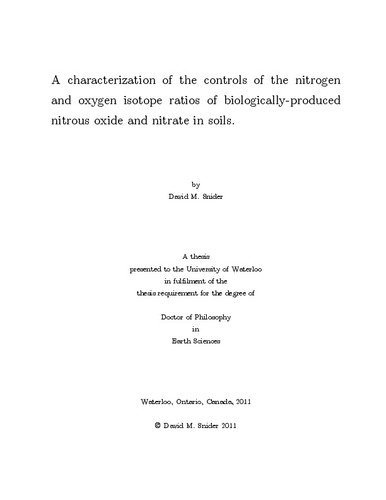 Nitrous oxide (N₂O) is a potent greenhouse gas, an important driver of climate change, and its concentration in the atmosphere is rising at an unprecedented rate. Agriculture is the leading contributor of all the anthropogenic N₂O sources, and the vast majority of agricultural N₂O emissions originate from soil. Of all the natural N₂O emissions, two-thirds originate from soil and temperate forests contribute approximately one-sixth of the natural soil emissions. Consequently, there is great interest in understanding the soil nitrogen processes responsible for N₂O production so that effective policies and management practises can be implemented to successfully mitigate climate change. The stable isotopes of nitrogen (N) and oxygen (O) in soil N₂O emissions are hypothesized to be useful indicators of the biogeochemical processes that produce and consume N₂O, and they may be used to apportion different environmental sources. The primary objective of this thesis was to assess the utility of δ¹⁵N and δ¹⁸O values to differentiate N₂O produced by nitrification and denitrification. Most of the previous research on N₂O isotopes has utilized microbial cultures of single organisms; yet natural systems contain a consortium of N-metabolizing microorganisms so the relevance of this early work to natural environments is uncertain. This thesis presents the results of experimental incubations of soil from an agricultural site and a temperate forest located within Ontario, Canada. Two well-drained soils (upland), two poorly-drained soils (wetland), and one stream sediment were incubated under varying conditions (temperature, moisture, and N-availability) to achieve a wide range in the rate of N₂O production. The δ¹⁵N and δ¹⁸O values of N₂O produced from the different experiments were characterized and the isotope effects (ε) of N₂O production were calculated. Experiments were conducted in aerobic or anoxic atmospheres to stimulate N₂O formation by nitrification and denitrification, respectively. The δ¹⁵N-N₂O produced by denitrification in all soils was 7–35‰ lower than the δ¹⁵N-nitrate (NO₃⁻). The δ¹⁵N-N₂O produced by nitrification in the upland forest soil and the agricultural soils was 28–54‰ lower than the δ¹⁵N-ammonium. Nitrification in the forested wetland soil yielded higher δ¹⁵N-N₂O values (Δ = −16‰), which was likely caused by an increase in the δ¹⁵N-substrate. With the exception of the latter soil, there was clear ¹⁵N-separation between the nitrification- and denitrification-derived N₂O in all soils. Consequently, δ¹⁵N values can be used to apportion different environmental sources of N₂O on a site-by-site basis, provided that the rates of N metabolism are known and the isotopic endmembers are well-characterized. A novel approach was employed in this thesis to help unravel the key controls of δ¹⁸O-N₂O and δ¹⁸O-NO₃⁻ formation. Different ¹⁸O-labelled soil waters were used to demonstrate that the abiotic exchange of oxygen atoms between water and nitrite (in equilibrium) is an important control of the δ¹⁸O-N₂O formed by nitrifier-denitrification and the δ¹⁸O-NO₃⁻ formed by nitrification. O-exchange in these incubations was highly variable between soils (37–88%) and it appeared to be rate-related. Furthermore, the δ¹⁸O value of microbial NO₃⁻ is partially controlled by ¹⁸O/¹⁶O fractionation that occurs during O-exchange (equilibrium fractionation) and the uptake of molecular oxygen (O₂) and water (H₂O) (kinetic fractionation). This research showed that the δ¹⁸O value of microbially-produced NO₃⁻ cannot be successfully predicted in soils based upon the commonly used ‘one third, two-thirds rule’, which only takes into account the δ¹⁸O values of O₂ and H₂O. Successful predictions of δ¹⁸O-NO₃⁻ using this rule appear to be fortuitous and are because of the range of δ¹⁸O-H₂O at natural abundance and the magnitude of the isotope effects involved. Enzyme-catalyzed (biotic) O-exchange between water and nitrite/nitric oxide in denitrification was also quantified for the first time in soils. O-exchange during denitrification was significant and variable (39–95%), but uniquely confined to narrow ranges for each soil type. Almost complete O-exchange occurred in the well-drained agricultural and forested soils (86–95%); less O-exchange occurred in the agricultural and forested wetland soils (63–70%); and even less O-exchange occurred in the agricultural stream sediment (39–51%). The magnitude of O-exchange during denitrification was independent of soil temperature and moisture for a given soil, and it was not related to the rate of N₂O production. This implies that the amount of O-exchange that occurs during soil denitrification is controlled by the dominant microbial community. For the first time, estimates of the net O isotope effect were determined for N₂O production by soil denitrifiers that accounted for the complicating effects of O-exchange. The net ¹⁸O-discrimination (N₂O−NO₃⁻) ranged between +32‰ and +60‰, with the exception of one treatment that was cooled (ε = +17‰). The O isotope separation (Δ) that is actually observed in natural systems is often much lower, and in some cases negative. This is because the atomic O-exchange between water and nitrite/nitric oxide effectively diminishes the net ¹⁸O separation between NO₃⁻ and N₂O because δ¹⁸O values of environmental water are usually lower than the δ¹⁸O values of N₂O-precursors. The determinants of δ¹⁸O-N₂O produced by nitrification pathways are complex and there is no holistic explanation of the O isotope dynamics in the literature. This thesis provides the first systematic model to describe δ¹⁸O-N₂O formation by aerobic pathways. In addition to O-exchange between water and nitrite (at equilibrium), δ¹⁸O-N₂O is controlled by ¹⁸O/¹⁶O fractionation that results from this O-exchange mechanism, and from fractionation that occurs during ammonia-oxidation and nitrite-reduction. Although explaining δ¹⁸O-N₂O values produced by nitrification is complex, reports of nitrifier-derived δ¹⁸O-N₂O in the literature and this thesis are narrowly confined between +13‰ and +31‰ (rel. VSMOW). This is distinct from much of the denitrifier-produced δ¹⁸O-N₂O, which is often ¹⁸O-enriched and higher than +33‰. In three out of the five different soils investigated in this thesis, δ¹⁸O-N₂O could be used to separate N₂O formed by nitrification and denitrification. There was poor δ¹⁸O separation between nitrifier- and denitrifier-derived N₂O in the well-drained soils because high amounts of biotic O-exchange and reduced O isotope separations yielded lower (predicted) estimates of denitrifier-produced δ¹⁸O-N₂O. On the other hand, δ¹⁵N values could be used to apportion nitrifier- and denitrifier-derived N₂O sources in these soils. Thus, stable isotope ratios of N₂O are a valuable and promising tool that may help differentiate nitrifier-N₂O from denitrifier-N₂O in natural soil environments.

David Snider (2011). A characterization of the controls of the nitrogen and oxygen isotope ratios of biologically-produced nitrous oxide and nitrate in soils. UWSpace. http://hdl.handle.net/10012/6053