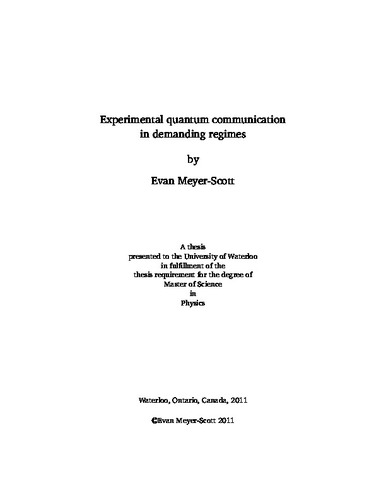 Quantum communication promises to outperform its classical counterparts and enable protocols previously impossible. Specifically, quantum key distribution (QKD) allows a cryptographic key to be shared between distant parties with provable security. Much work has been performed on theoretical and experi- mental aspects of QKD, and the push is on to make it commercially viable and integrable with existing technologies. To this end I have performed simulations and experiments on QKD and other quantum protocols in regimes previously unexplored. The first experiment involves QKD via distributed entanglement through the standard telecommunications optical fibre network. I show that entanglement is preserved, even when the photons used are a shorter wavelength than the design of the optical fibre calls for. This surprising result is then used to demonstrate QKD over installed optical fibre, even with co-propagating classical traffic. Because the quantum and classical signals are sufficiently separated in wavelength, little cross-talk is observed, leading to high compatibility between this type of QKD and existing telecommunications infrastructure. Secondly, I demonstrate the key components of fully-modulated decoy-state QKD over the highest-loss channel to date, using a novel photon source based on weak coherent (laser) pulses. This system has application in a satellite uplink of QKD, which would enable worldwide secure communication. The uplink allows the complex quantum source to be kept on the ground while only simple receivers are in space, but suffers from high link loss due to atmospheric turbulence, necessitating the use of specific photon detectors and highly tailored photon pulses. My results could be applied in a near term satellite mission.