A Tale of Two (Mid-Sized) Cities: Analysis of External Factors Affecting Transit Ridership in the City of Kingston and Region of Waterloo 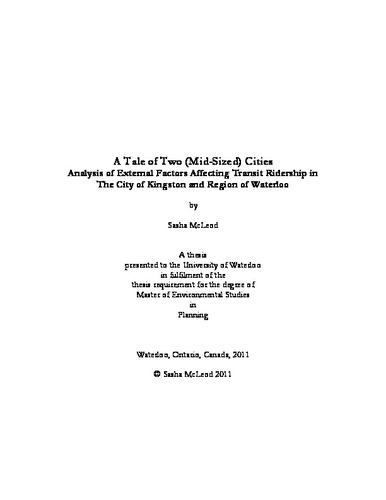 This thesis evaluates how municipal transit ridership in mid-sized cities is influenced by external factors. External factors are forces outside a municipality’s direct control but potentially affect the municipality in some way, in particular its transit ridership. The thesis also determines the appropriateness of municipal levels of response to each factor. Two mid-sized municipalities in Ontario, Canada – the City of Kingston and Region of Waterloo – were studied. The evaluation, first, identifies the trends or “current conditions” between the municipalities and five sets of external factors to determine influence on ridership. The factors are 1. Population Growth and Density; 2. Demographics (Seniors, Students and Immigrants); 3. Regional Location; 4. Federal/Provincial Impacts; and 5. Fuel Prices. Second, the municipality’s level of response was measured in three ways. Staff awareness of the factor and its influence was gauged using key informant interviews and municipal councillor surveys conducted by the researcher. Internal policy and guidance documents measured whether policies relating to each factor are appropriate. Finally, observations of implemented initiatives determined whether they appropriately deal with each factor. The study finds that more external factors act on Waterloo than Kingston. Therefore, Waterloo has strong incentives to prioritize – among many municipal responsibilities – its transit system and to focus on increasing ridership. The strongest incentives for Waterloo are population growth, the student demographic and federal/provincial impacts. Kingston has only one strong incentive: the senior demographic. The study also finds that Waterloo has appropriate levels of response to more of the external factors than does Kingston. Recommendations for Kingston and Waterloo are provided for improving their levels of response to each set of factors. The paper concludes that municipal size is an important driver, but internal levels of response are critical success factors. The data analysis matrix developed for this study can be used by other municipalities to help identify appropriateness of internal responses as they relate to the influence of external factors within their municipality.

Sasha McLeod (2011). A Tale of Two (Mid-Sized) Cities: Analysis of External Factors Affecting Transit Ridership in the City of Kingston and Region of Waterloo. UWSpace. http://hdl.handle.net/10012/6051