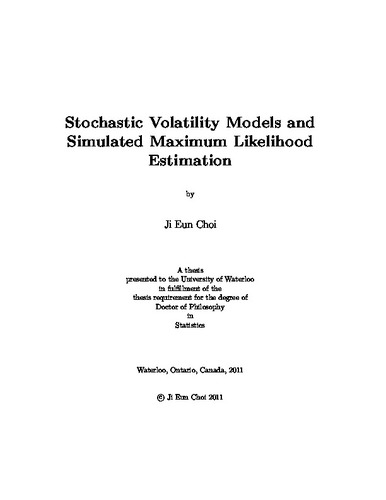 Financial time series studies indicate that the lognormal assumption for the return of an underlying security is often violated in practice. This is due to the presence of time-varying volatility in the return series. The most common departures are due to a fat left-tail of the return distribution, volatility clustering or persistence, and asymmetry of the volatility. To account for these characteristics of time-varying volatility, many volatility models have been proposed and studied in the financial time series literature. Two main conditional-variance model specifications are the autoregressive conditional heteroscedasticity (ARCH) and the stochastic volatility (SV) models. The SV model, proposed by Taylor (1986), is a useful alternative to the ARCH family (Engle (1982)). It incorporates time-dependency of the volatility through a latent process, which is an autoregressive model of order 1 (AR(1)), and successfully accounts for the stylized facts of the return series implied by the characteristics of time-varying volatility. In this thesis, we review both ARCH and SV models but focus on the SV model and its variations. We consider two modified SV models. One is an autoregressive process with stochastic volatility errors (AR--SV) and the other is the Markov regime switching stochastic volatility (MSSV) model. The AR--SV model consists of two AR processes. The conditional mean process is an AR(p) model , and the conditional variance process is an AR(1) model. One notable advantage of the AR--SV model is that it better captures volatility persistence by considering the AR structure in the conditional mean process. The MSSV model consists of the SV model and a discrete Markov process. In this model, the volatility can switch from a low level to a high level at random points in time, and this feature better captures the volatility movement. We study the moment properties and the likelihood functions associated with these models. In spite of the simple structure of the SV models, it is not easy to estimate parameters by conventional estimation methods such as maximum likelihood estimation (MLE) or the Bayesian method because of the presence of the latent log-variance process. Of the various estimation methods proposed in the SV model literature, we consider the simulated maximum likelihood (SML) method with the efficient importance sampling (EIS) technique, one of the most efficient estimation methods for SV models. In particular, the EIS technique is applied in the SML to reduce the MC sampling error. It increases the accuracy of the estimates by determining an importance function with a conditional density function of the latent log variance at time t given the latent log variance and the return at time t-1. Initially we perform an empirical study to compare the estimation of the SV model using the SML method with EIS and the Markov chain Monte Carlo (MCMC) method with Gibbs sampling. We conclude that SML has a slight edge over MCMC. We then introduce the SML approach in the AR--SV models and study the performance of the estimation method through simulation studies and real-data analysis. In the analysis, we use the AIC and BIC criteria to determine the order of the AR process and perform model diagnostics for the goodness of fit. In addition, we introduce the MSSV models and extend the SML approach with EIS to estimate this new model. Simulation studies and empirical studies with several return series indicate that this model is reasonable when there is a possibility of volatility switching at random time points. Based on our analysis, the modified SV, AR--SV, and MSSV models capture the stylized facts of financial return series reasonably well, and the SML estimation method with the EIS technique works very well in the models and the cases considered.