Functional Study of a Protein (UnkG) in Pseudomonas putida UW4 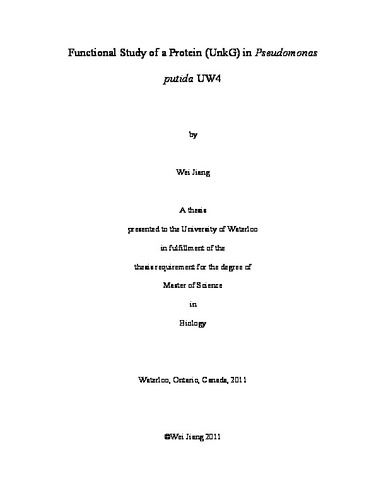 The role played by the protein UnkG from the plant growth-promoting bacterium Pseudomonas putida UW4 in the ability of the bacterium to facilitate plant growth was studied. Previous work showed that over-expressing UnkG decreased the ability of P. putida UW4 to facilitate plant growth. In contrast, an unkG knock-out mutant of P. putida UW4 displayed an increased ability to promote plant growth. Various biological activities of P. putida UW4, P. putida UW4/pETP and P. putida UW4/pETP-unkG have been compared. Thus, the growth curves were measured; the Biolog™ system was used to test the ability of these strains to utilize various carbon sources; the strains were observed by scanning electron microscopy to assess their relative cell sizes; biochemical assays were conducted to quantify 3-indoleacetic acid production and to measure the enzymatic activity of 1-aminocyclopropane-1-carboxylate (ACC) deaminase; proteome-level changes of P. putida UW4/pETP and P. putida UW4/pETP-unkG were profiled using two-dimensional difference in-gel electrophoresis (DIGE), followed by mass spectrometry identification of the altered proteins. After running DIGE, sixteen altered proteins were identified and their possible roles in the interactions between the bacterium and plants were discussed. Based on the preliminary results, we hypothesize that 1) UnkG may be detrimental to plant growth; 2) UnkG may negatively regulate a number of key cellular functions in a general way related to the energy balance of the bacterium.