Exploring Motivations and Values for Domestic Travel from an Islamic and Arab Standpoint: The Case of Saudi Arabia 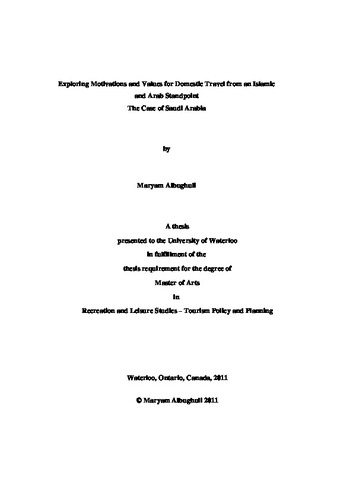 Saudi Arabia is the world's leading oil producer and exporter. The economy in the country is almost totally dependent on oil. Tourism is one of the sectors which received more attention in the last few years after the establishment of the High Commission for Tourism and Antiques in 2000. The Commission's main purpose is to develop, promote and enhance the tourism sector, particularly the domestic tourism sector, to be one of the important sectors in economy. The main purpose of this research is to identify motivations and values for Saudi citizens to travel domestically and to measure their satisfaction on the services they are provided with when they travel within the country. Maslow's Motives Modal (1998) and Rokeach Value Survey (1973) are applied in the study. Motivations are examined by understanding the 'push' and 'pull' factors and these concepts have been used in many studies. The idea behind these concepts is that people travel because they are pushed by their own internal forces and pulled by external forces of the destination attributes. The study was conducted in the city of Medina and Jeddah in Saudi Arabia and 140 questionnaires were obtained, 77 in Medina and 63 in Jeddah. Respondents were selected using a convenience sample through a snowball technique among females and families and a convenience and purposive sample among males at places such as coffee shops and restaurants. Obtained data were analyzed using SPSS. The findings indicated that there are eight push motivations for Saudi domestic tourists including (Relaxation, Spirituality, Family, Cultural, Activity, Knowledge, Loyalty and Economic) and five pull factors including (Religious, Safety, Entertainment, Luxury and Local culture). The study showed that the push factor of Relaxation and the pull factor of Religion are the most important factors as perceived by Saudis. It was also revealed that Saudi domestic tourists have high level of satisfaction on the services they are provided with when they travel domestically. The study suggested further research to be carried out across the Muslim and Arab world in order to explore more travel motivations and values dimensions for people in this region.

Maryam Albughuli (2011). Exploring Motivations and Values for Domestic Travel from an Islamic and Arab Standpoint: The Case of Saudi Arabia. UWSpace. http://hdl.handle.net/10012/6040