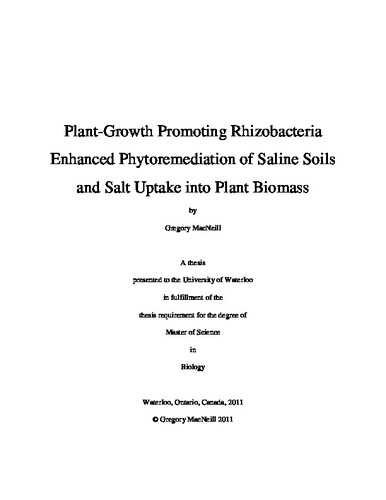 Soil salinity affects an estimated one billion hectares worldwide. Excess salinity inhibits plant growth, limiting crop production. This is caused by osmotic stress in saline soil, nutrient imbalance and specific ion toxicity. There have been many methods of remediation investigated, including excavation, soil washing and phytoremediation. Phytoremediation involves the growth of plants on impacted soils to degrade or sequester contaminants. The remediation of salts relies on the uptake of ions into plant biomass where the salt is sequestered and the biomass can then be harvested. This method removes the salt from the site and leaves the top soil in place, which aids in revegetation after site remediation is completed. Plant-growth promoting rhizobacteria (PGPR) improves plant growth by lowering the levels of stress ethylene within the plant, thereby increasing the biomass available to sequester ions. The objectives of this research were to investigate the efficiency of phytoremediation of salt impacted soils in field remediation sites. Previously isolated strains of PGPR (UW3, Pseudomonas putida; UW4, Pseudomonas putida; and CMH3, Pseudomonas corrugata) were used in field trials involving the planting of oats (Avena sativa), annual ryegrass (Lolium multiflorum), tall wheatgrass (Agropyron elongatum) and tall fescue (Festuca arundinacea C.V. Inferno). The salt tolerance of various switchgrass (Panicum virgatum L.) cultivars (Cave-In-Rock, Southlow, Forestburg, and common) was compared to tall wheatgrass and Inferno tall fescue to investigate the potential of switchgrass for phytoremediation. Improvement of seed germination under salt stress by H2O2 pre-treatment was investigated both as an individual treatment and in combination with CMH3 treatment. The ion uptake into plant biomass was iii compared to the change in salinity, to determine how much of the decrease in site salinity is accounted for by uptake of salt by plants. H2O2 pretreatment resulted in a 50% increase in root and shoot emergence of tall wheatgrass under 75 mM NaCl stress compared to control treatments, which matched the germination improvement observed with PGPR treatment. The combination of H2O2 and CMH3 showed a similar improvement to root emergence under stress, but had no observable effect on shoot emergence when compared to the no-H2O2-no-PGPR control. Switchgrass cultivars showed a lower germination rate than tall wheatgrass at salt levels from 0 mM to 150 mM NaCl. The measured uptake of Na+, K+, Ca2+, Mg2+ and Cl- into plant biomass during a phytoremediation field trial was able to account for approximately 70% of the observed change in salinity in 2008. In 2009 the uptake of Na+ and Cl- into Kochia scoparia, a weed species that invaded the field site after a hard frost, was able to account for 36% of the observed change in salinity.