System Justification and the Defense of Committed Relationship Ideology 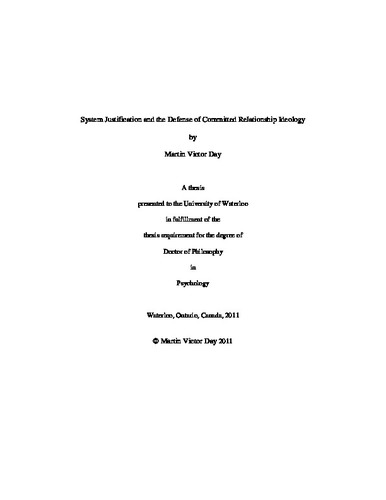 A consequential ideology in Western society is the uncontested belief that a committed relationship is the most important adult relationship and almost all people want to marry or seriously couple (DePaulo & Morris, 2005). In the present article, I investigated the extent to which the system justification motive may contribute to the adoption of this ideology. In Studies 1 and 2, I examined whether a heightened motive to maintain the status quo would increase defense of committed relationship values. In Study 3, I examined the reverse association, that is, whether a threat to committed relationship ideology would also affect socio-political system endorsement. As past research has found that the justification of political systems depends upon how much these systems are perceived as having control over life outcomes, in Study 4 I tested whether the defense of the system of committed relationships would also increase when framed as controlling. Results from Studies 1–4 were consistent with my hypotheses, but only for men. In Study 5, using cross-cultural data, I sought to replicate these findings correlationally and probe for a cause of the gender effect. Results from over 33 000 respondents indicated a relationship (for men) between defense of the socio-political system and defense of marriage in countries where the traditional advantages of men over women were most threatened. In Studies 6 and 7, I investigated when the gender difference found in the earlier studies disappears. Results revealed that when I measured (Study 6) or manipulated (Study 7) personal relationship identity (i.e., how much relationships are part of the active self-concept), rather than relationship ideology, effects also emerge for women.