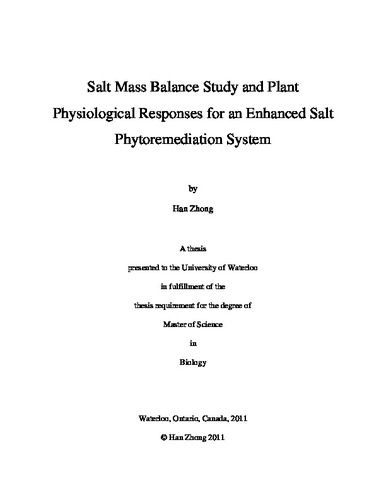 Salinity is one of the most severe environmental factors that limits global crop yield. Enhanced phytoremediation using plant growth promoting rhizobacteria (PGPR) has proven to be an effective and environmentally responsible approach to remove salt from the surface soil and reclaim salt-impacted soil for crop production. PGPR enhanced phytoremediation systems (PEPS) were applied to two research sites, Cannington Manor North (CMN) and Cannington Manor South (CMS) in southern Saskatchewan. The sites were impacted by brine leakage during upstream oil and gas production. A salt mass balance study was performed based on data collected from these two sites. Both sites were planted in June. Soil samples were taken in June 2009 (beginning of the season), August (midseason) and October (end of the season). Soil salinity changes throughout the season were monitored by measuring soil electrical conductivity (EC). The average surface soil ECe decreased from 3.7 dS/m to 3.1 dS/m at CMN, and from 10.2 dS/m to 9.2 dS/m at CMS in 2009 season. Plant samples that were collected in August and October were analyzed for sodium and chloride concentrations. These values were then converted into predicted ECe changes for the soil to compare with the actual changes in soil ECe. Plant uptake of NaCl was calculated to account for 25.2% and 28.1% of the decrease in surface soil ECe at CMN and CMS, respectively. However, plant samples were washed prior to salt content analysis. A considerable amount of salt could have been lost during the washing process. Several plant samples from other salt-impacted sites in Saskatchewan and Alberta were selected to examine salt loss due to tissue washing. The salt ions lost by washing were determined to be 44.4% for Na+ and 63.8% for Cl-. After the adjustment of plant NaCl uptake data by the loss due to washing, plant accumulation of NaCl accounted for 59.9% of the decrease in surface soil ECe at CMN and 56.1% at CMS. When plant uptake of K+ and Ca2+ were also taken into consideration by a simulation study, the decrease in surface soil ECe that was caused by plant uptake of salt ions accounted for 107.5% at CMN and 117.5% at CMS. This indicated that plants can have a significant role in the remediation of salt-impacted soil. The effects of PGPR (Pseudomonas spp. UW4 and Pseudomonas corrugata CMH3) treatment on selected physiological indicators, such as proline, superoxide dismutase (SOD), membrane leakage and photosynthesis, were examined on annual ryegrass (Lolium multiflorum). Plants were grown under three saline conditions: non-saline topsoil, non-saline topsoil spiked with NaCl to 10 dS/m, and high saline soil collected from a salt-impacted site diluted with non-saline topsoil to reach 10 dS/m. The shoot fresh weight of plants grown in spiked salt soil decreased by 74% and in diluted salt soil by 44%, respectively, compared to control soil. Both types of salt soil increased SOD activities by approximately 50%, proline concentrations by 20 to 25 fold, and membrane leakage levels by 1.6 to 2.8 fold. Significant impairment of photosynthetic performances, as indicated by the decreases in the chlorophyll fluorescence parameters Fv/Fm, yield and qP, and a parallel increase in qN, was also observed using Pulse Amplitude Modulation (PAM) fluorometry for plants in diluted impacted soil. PGPR moderately increased fresh weight and SOD activity. Both UW4 and CMH3 significantly increased proline concentration and lowered membrane leakage relative to untreated plants. Therefore, PGPR improve plant performance under salt stress by elevating proline levels, which can act as a quencher of destructive reactive oxygen species. PGPR treatment also restored all the chlorophyll fluorescence parameters nearly to the non-stressed level, indicating protection of photosynthetic tissues of PGPR treated plants under salt stress. Overall, PEPS was successfully applied to the salt-impacted sites. Plant uptake of salt played a major role in the decrease of surface soil ECe. PGPR’s role in enhancing plant performance under salt stress was suggested by the elevated proline concentrations, the decreased membrane leakage levels and the restored photosynthetic activity.