Friend or Foe? Memory and Expectancy Biases for Faces in Social Anxiety 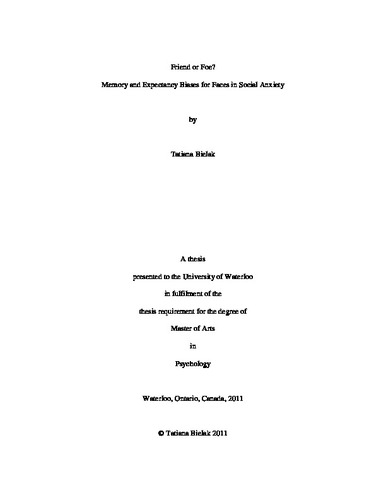 Previous studies examining memory biases for threatening faces in social anxiety (SA) have yielded inconclusive results. In the present study, memory and expectancy biases were tested within the context of a novel face recognition paradigm that was designed to offset some of the methodological challenges that have hampered previous research. Undergraduates with high (n = 40) and low (n = 40) levels of SA viewed a series of neutral faces randomly paired with phrases that communicated positive or negative social feedback. Participants’ recognition memory was tested for previously encountered faces, and for their categorization of each encoded face as having been associated with negative (mean) or positive (nice) interpersonal statements. For new faces, participants were asked whether the person seemed mean or nice. Results provided no evidence in support of a general memory bias for threatening (mean) faces among high SA individuals, but instead suggested that high SA individuals lack a positive expectancy bias to appraise new social partners as being nice. Implications are considered for cognitive behavioral and interpersonal models of SA.