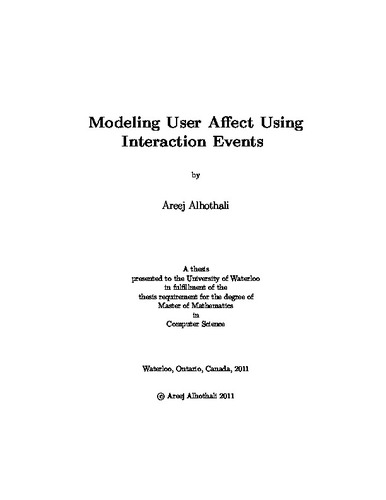 Emotions play a significant role in many human mental activities, including decision-making, motivation, and cognition. Various intelligent and expert systems can be empowered with emotionally intelligent capabilities, especially systems that interact with humans and mimic human behaviour. However, most current methods in affect recognition studies use intrusive, lab-based, and expensive tools which are unsuitable for real-world situations. Inspired by studies on keystrokes dynamics, this thesis investigates the effectiveness of diagnosing users’ affect through their typing behaviour in an educational context. To collect users’ typing patterns, a field study was conducted in which subjects used a dialogue-based tutoring system built by the researcher. Eighteen dialogue features associated with subjective and objective ratings for users’ emotions were collected. Several classification techniques were assessed in diagnosing users’ affect, including discrimination analysis, Bayesian analysis, decision trees, and neural networks. An artificial neural network approach was ultimately chosen as it yielded the highest accuracy compared with the other methods. To lower the error rate, a hierarchical classification was implemented to first classify user emotions based on their valence (positive or negative) and then perform a finer classification step to determining which emotions the user experienced (delighted, neutral, confused, bored, and frustrated). The hierarchical classifier was successfully able to diagnose users' emotional valence, while it was moderately able to classify users’ emotional states. The overall accuracy obtained from the hierarchical classifier significantly outperformed previous dialogue-based approaches and in line with some affective computing methods.