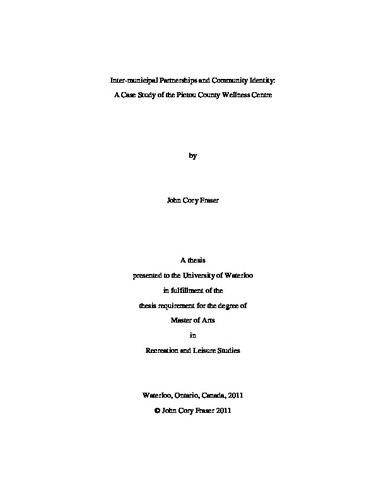 Community identity is a concept involving a web of relationships whereby a committed group of people emotionally identify with a shared set of values, norms, meanings and history. When municipalities co-operate, concerns among stakeholders can arise that potentially lead to a sense that interdependence among municipal partners can threaten a community’s independence and correspondingly community identity. The main goal of this study was to understand how the development of an inter-municipal partnership associated with the provision of a centralized multi-use recreation facility affected community identity among partnering communities. This goal was accomplished by exploring the case of Pictou County. Municipal leaders, members of the public, and local persons of influence were interviewed to gather their impression of the implications of an inter-municipal partnership for community identity. An interpretivist viewpoint guided this case study. One-on-one interviews were transcribed, analyzed, and broken down into different themes to capture the impact this case had on community identity. Findings were organized into three sections: (1) concerns about the partnership, (2) anticipated benefits, and (3) the overall implications for community identity. The findings of this case study revealed a shift in identity within the region in which the partnership took place. Although residents in each neighbouring municipality had a strong sense of community identity, the case illustrated a general shift toward a regional identity that was beginning to emerge. Study participants understood why some members of their communities were threatened by the inter-municipal partnership under investigation, but explained how the partnership created benefits that outweighed the negative impacts of co-operation. In particular, stakeholders believed the economic benefits of the partnership overshadowed any concerns about transparency or public input. This has allowed a shift in the tradition ways recreation services have traditional been offered in the county. Now instead of each municipality working as independent services providers they are now starting to work more interdependently to provide services for the municipalities. This case helps add to the body of literature involving inter-municipal partnerships and provide the opportunity for future research to be conducted on topics such as geographic identity and interscetionality. As well, the case provides insight to future practitioners when they are conducting research to understand that citizen participation is important in a project like this but it may be less significant than if the primary interest, such as economic interests, of the community members if initially managed. Addressing these interests should help lessen the chance of resistance forming later in the project.