Helping in a Random World: Evidence that Prosocial Intentions and Behavior can Satiate Compensatory Control Needs 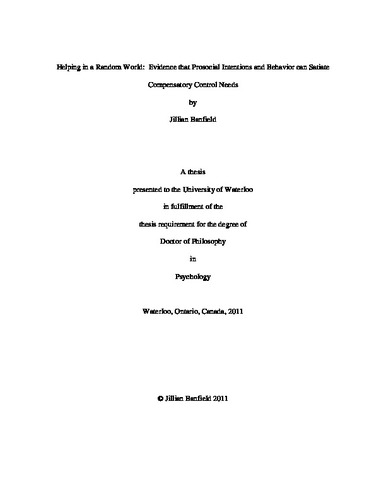 The present research examines a unique motivator of prosocial intentions and behavior: the need to believe that the world is an orderly, predictable place. Previous social psychological research has explained helping behavior as due to either empathic concern for victims (e.g., Batson et al., 1981) or a desire to relieve one’s negative affective state (Cialdini, et al., 1973). Drawing on recent research on compensatory control, I suggest that the act of helping others may be a means through which people compensate for threats to their belief in a controlled and orderly social world. The results of the current studies indicate that, when the belief in an orderly world is threatened, helping behavior can serve as a means for restoring perceptions of control. Specifically, I found that: a threat to personal control increased intentions to give blood at a blood donor drive (Study 1); a threat to order in the world increased helping intentions, and was not moderated by individual differences in socially-desirable responding (Study 2); providing participants with an unrelated opportunity to affirm personal control eliminated the effects of control threat on helping intentions (Study 3); and the effect of control threat on helping behavior was moderated by individual differences in aversion to unpredictability (Study 4). Implications for the psychological understanding of helping behavior and processes of compensatory control are discussed.