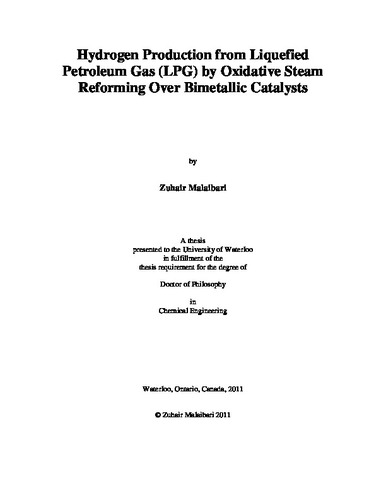 Hydrogen is a promising renewable fuel for producing energy in transportation and domestic applications. This study investigates the production of H2 from reforming of liquefied petroleum gas (LPG). LPG is a mixture of gases, mainly propane and butane, produced from petroleum or natural gas. It is a liquid under moderate pressure and therefore a favourable feedstock for distributed hydrogen production since it is easy to store and transport with a distribution network already in place. With its wide range of propane and butane compositions world wide, in this study LPG was considered as a mixture of propane and butane. H2 production from LPG was investigated through oxidative steam reforming of propane and butane. Oxidative steam reforming (OSR) can be viewed as a combination of two reactions: partial oxidation (PO) and steam reforming (SR). By carefully controlling the steam to carbon (S/C) and oxygen to carbon (O2/C) ratios in the feed, OSR can produce higher H2 yields than PO at operational temperatures lower than SR. In the first part of this study, based on the literature and preliminarily experiments, two Ni based bimetallic catalysts, Pt-Ni/Al2O3 and Mo-Ni/Al2O3, were selected to be compared to a monometallic 15 wt% Ni/Al2O3 catalyst for OSR of a 1:1 propane to butane LPG mixture under different operational conditions. This catalysts screening study evaluated the performance of the catalysts on the basis of a statistical factorial experimental design. The factorial design was efficient in optimizing experimental runs, while testing the activity and product distribution of the catalysts at different operational limits. The importance of the factorial design was clearer when analyzing results for the Pt-Ni catalysts, as the catalyst showed different product compositions at the two selected loadings (0.2 and 1 wt%) under different conditions compared to the unpromoted catalyst. However, at both loadings, the Pt-Ni catalyst did not have a significant effect on fuel conversion or catalyst selectivity to different products. On the other had, under all stable conditions in the factorial design experiments, the Ni-Mo catalyst had higher H2 and CO yields and lower CH4 yields compared to the unpromoted catalyst. To our knowledge these product composition variations were not reported before in the literature for hydrocarbon reforming reactions over Mo promoted catalysts. The catalyst screening study also included time on stream catalysts stability tests. These experiments illustrated the high potential for solving the Ni stability problem associated with LPG reforming as the unpromoted 15Ni catalyst suffered from deactivation by coking and could not sustain its high conversion. On the other hand, promoting the Ni catalysts with 1 wt% Pt or 0.1 wt% Mo improved the catalyst resistance to coking and sustained its activity and product composition throughout the 18 hours of the stability tests. However, an increase in the Mo loading to 0.3 wt% in the Mo-Ni bimetallic catalyst, led to lower fuel conversions and loss of stability with time. Because of the interesting performance of the Mo-Ni /Al2O3 catalyst observed in the catalyst screening tests, and the lack of explanations of different aspects of this performance in the literature, especially in the presence of O2, the second part of the study was concerned with the investigation of the effect of small amounts of Mo addition on the activity, selectivity and stability of Ni catalysts when used for H2 production from LPG OSR. Individual fuels and reactions experiments showed that butane OSR gave the highest fuel conversions and H2 production rates. These experiments also revealed the importance of O2 for the catalyst activity and stability as for both hydrocarbons the catalyst suffered deactivation by coking under SR conditions. However, O2 compositions in the feed should be carefully optimized as characterization of fresh and aged catalysts showed that the loss of stability observed earlier in the catalyst screening tests for higher Mo catalysts loading, was caused by the oxidation of active Ni species to inactive Ni and Ni-Mo phases which resulted from the oxidative environment of the reaction during aging. In the last part of this study, surface and bulk properties of the monometallic Ni catalyst was compared to the Mo-Ni bimetallic catalyst using different catalyst characterization techniques ( TPR, TPO, TGA, XRD, H2 and O2 chemisorption and DRIFTS) in order to understand the structural effect of Mo addition on the catalytic properties. It was found that the improvements in the catalytic properties of the catalyst and the change in its selectivity to different products were caused by an electronic effect of Mo and its different oxide phases on Ni species. These electronic effects enhanced the O2 mobility over the catalysts surface leading to higher gasification rates of CHx species and hence, preventing coking of the catalyst. They also affected the stability of adsorbed reaction intermediates over the catalysts surface which affected the selectivity of the catalyst to different reaction products.