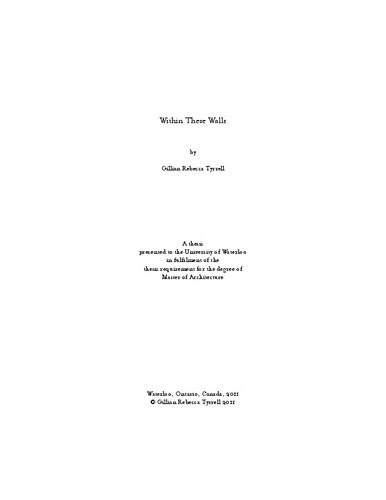 The Cork Good Shepherd Magdalen Asylum opened in the summer of 1872, and was abandoned in 1994. The number of women who passed through its walls remains unknown. Ireland’s Magdalen Laundries, a system of religious-run female penitentiaries founded to incarcerate society’s so called ‘fallen’ women, is a part of the country’s past traditionally met with reticent silence. For the atonement of their perceived sins, the inmates worked in the Magdalen laundries for no pay. The arduous labour was symbolic; the washing of soiled linen, for the purging of one’s soul. The inmates were held under no legal authority, had committed no crime, and were assigned no sentence; many women, unaware of their rights, were held in the laundries until they died. These institutions existed in Ireland over the span of three centuries, the last closing in 1996. Though a dialogue has begun to surround this chapter of Irish history, the issue remains far from resolved. The government has made no official acknowledgment or apology for their role in perpetuating such a shocking stance on social policy, while the Catholic orders responsible will not recognize the suffering caused at their hands. The Church refuses to release archival records that document the identities and numbers of the Magdalen women who worked in the laundries during the twentieth century. It is estimated that 30 000 ‘fallen’ women were put through this system - women who, with no records of their lives available, remain erased by anonymity. This lack of archival information has rendered the laundries, in Ireland’s collective consciousness, more in story than in history. The architecture that witnessed this past has since fallen victim to time. Whitewashed over with redevelopments, or left to fall into decay, the laundries, and their stories, are disappearing. Their place in the collective memory hangs in the balance, dwindling in the walls of their ruins. The sense of place, or memory, that is recorded in architecture, lingers in the folds of the ruin. Hovering like a ghost over its ashes, it becomes orphaned. As such, the preservation of place becomes laden with a sense of urgency. It becomes a problem of representation. Taking what remains of the Cork Good Shepherd Magdalen Asylum as a point of entry, I have endeavoured to decipher the fragments of the ruin as a reference to the whole, to, as Victor Hugo writes in Notre-Dame de Paris, turn the mountain of architecture into the imperishable flock of birds – the petrified memory into the narrative one. This is done in three parts. The first introduces the site’s historical and social context, composing a portrait of the building through the ephemera of its past. The second addresses the presence of absence in the return to the ruin, focusing its investigation on the imaginary space that stretches out between the shadow of the past-self, embodied in the built world, and the return of the present-self to this embodiment once it has fallen into ruin. This is followed by a series of meditative narratives constructed from the historical, latent, and projected memories contained within the ruin of the Magdalen Asylum in Cork. Part three is a rumination on the ruin, speculating on its role within human consciousness. The ruin of the Cork Good Shepherd Magdalen Asylum testifies to a dark history - one that remains largely unresolved, one that many would rather forget. This history has yet to find its place in Ireland’s collective memory and, with the vestiges of its past rapidly dissolving, it is in danger of erasure.