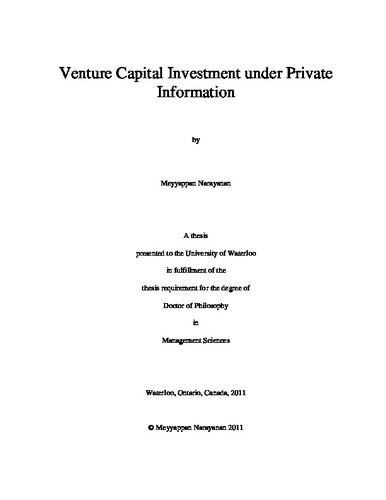 Many venture capitalists (VCs) use the “VC method” of valuation where they use judgment to estimate a probability of successful exit while determining the ownership share to demand in exchange for investing in a venture. However, prior models are not aligned with the “VC method” because they do not consider private information about entrepreneurial characteristics, the primary drivers of the above probability, and consequently do not model judgment. The three main chapters of this thesis—one theoretical, one simulation, and one empirical study—examine the venture capital deal process in sync with the “VC method.” Chapter 2 is theoretical and develops a principal-agent model of venture capital deal process incorporating double-sided moral hazard and one-sided private information. The VC is never fully informed about the entrepreneur’s disutility of effort in spite of due diligence checks, so takes on a belief about the latter’s performance in the funded venture to determine the offer. This study suggests that there exists a critical point in the VC’s belief—and correspondingly in the VC’s ownership share—that maximizes the total return to the two parties. It also uncovers optimal revision strategies for the VC to adopt if the offer is rejected where it is shown that the VC should develop a strong advisory capacity and minimize time constraints to facilitate investment. Chapter 3 simulates venture capital deals as per the theoretical model and confirms the existence of critical points in the VC’s belief and ownership share that maximize the returns to the two parties and their total return. Particularly, the VC’s return (in excess of his or her return from an alternate investment) peaks for a moderate ownership share for the VC. Since private information with the entrepreneur would preclude the VC from knowing these critical points a priori, the VC should demand a moderate ownership share to stay close to such a peak. Using data from simulations, we also generate predictions about the properties of the venture capital deal space—notably: (a) Teamwork is crucial to financing; and (b) If the VC is highly confident about the entrepreneur’s performance, it would work to the latter’s advantage. Chapter 4 reports the results from our survey of eight seasoned VCs affiliated with seven firms operating in Canada, USA, and UK, where our findings received a high degree of support.