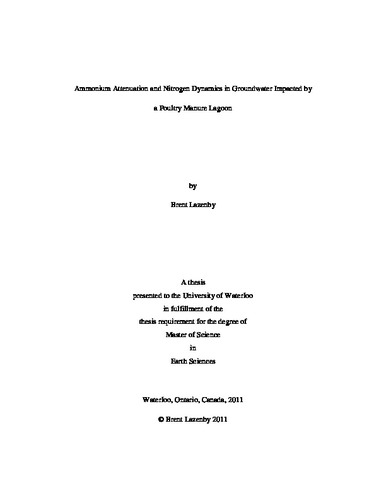 Fertilizer application and manure use practice in agriculture has become one of the most common sources of dissolved nitrogen species to both ground and surface waters. Nitrogen, released as nitrate (NO3-), ammonium (NH4+) and/or organic nitrogen (DON) is subject to a variety of transformation and attenuation processes in groundwater, including sorption, nitrification, denitrification, dissimilatory nitrate reduction to ammonium (DNRA), ammonification and anaerobic ammonium oxidation (anammox). Of these, only denitrification and anammox represent complete attenuation of nitrogen, releasing nitrogen gas (N2). This study examines the occurrence and mechanisms of nitrogen attenuation in groundwater affected by a manure lagoon. Lagoon effluent is in strong contrast to background water with elevated chemical constituents including NH4+ (mean = 121 mg N/L) and DON (218 mg N/L), which are transported through a fast moving groundwater flow system. The NH4+ rich plume interacts with NO3- rich background water at an interface ~3 m below ground surface. Over 100 m of groundwater transport from the source, total nitrogen (TN) was consistently reduced by 90% over two years of study. This reduction can be largely attributed to dilution (~ 80%), but the remaining 10% reflects a component of nitrogen loss due to attenuation, reflecting 32 mg N/L in attenuation and a TN degradation rate of 0.4 mg/L/day. Localized zones of nitrification and denitrification are evidenced by loss of NO3- accompanied by elevated N2O emissions. Anammox is implicated by localized enrichment of δ15N with according decreases in both NO3- and NH4+ at the plume-background interface and through corroborating microbiological study. Ammonification of DON along the flow path, something not observed in similar studies, is conjectured to have a confounding effect on a detailed isotopic investigation by introducing a second source of NH4+ that is depleted in δ15N-NH4+.