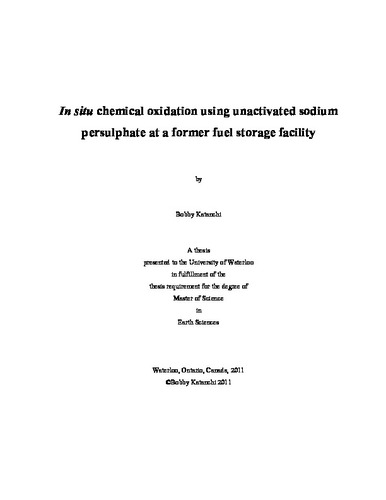 Petroleum hydrocarbon (PHC) contamination poses a serious threat to aquifer systems worldwide. Accidental releases of PHCs due to gasoline spills and leakage from underground storage tanks can often result in PHC subsurface contamination. The main compounds of concern associated with gasoline spills are benzene, toluene, ethylbenzene and xylenes (BTEX), trimethylbenzenes (TMBs) and naphthalene, due to their high mobility and potential human health risks. Sodium persulphate is one of the newest oxidants to gain widespread use for in situ chemical oxidation (ISCO), however its effectiveness in treating PHCs is not fully understood. In this study, the ability to use unactivated sodium persulphate as a remediation tool in treating dissolved and residual BTEX contamination was tested during a bench-scale laboratory study and within a pilot-scale field investigation. In both cases unactivated sodium persulphate was used at a concentration of 100 g/L. A laboratory-scale degradation potential batch test was conducted to assess the efficacy of unactivated sodium persulphate to oxidize petroleum hydrocarbon contaminated groundwater in conjunction with aquifer material from a field site. Data from the control reactions indicated that persulphate was stable for the entire 35-day experimental period and that the decrease in PHC concentrations for most of the samples followed a first-order degradation. The behaviour and ability for sodium persulphate to oxidize dissolved and residual BTEX contamination was further evaluated in a controlled pilot scale field study. 200 kg of sodium persulphate was dissolved in 2000 L of water and injected into the subsurface. Electrical conductivity (EC), pH, sodium, persulphate, sulphate and BTEX concentrations were all monitored throughout the 158-day study period. Field research showed that there was a strong correlation between EC and sodium concentrations. Hence, this relationship allowed for real-time EC measurements to be used to effectively predict the extent of the injectate. Based on the calculated aqueous density of sodium persulphate at a concentration of 100g/L, predicted simulation model results and observed tracer field results, density effects were present and played a very important role in the transport of the injectate. The heterogeneous geology of the site also greatly influenced the transport of the injectate. The majority of the injectate appeared to have flowed out of the layers with higher hydraulic conductivity that intersected the upper and lower portion of the injection well’s screen length. The extent of the injected slug in the layers with lower hydraulic conductivity located in the centre portion of the injection well’s screen length was less in comparison. In general, areas with elevated tracer, persulphate and sulphate concentrations, also showed a decrease in BTEX concentration. Four main responses were observed. Group 1 consists of sampling points where tracer levels were elevated along with a corresponding short-term decrease in dissolved BTEX. Group 2 consists of sampling points where elevated tracer levels was observed along with a long-term apparent decrease in dissolved BTEX. Group 3 consists of sampling points where the tracer was elevated however dissolved BTEX levels remained essentially at background levels. And finally, group 4 consists of sampling points where the tracer was not observed to be elevated hence no decrease in dissolved BTEX was observed. Laboratory studies showed that the oxidation of BTEX compounds by unactivated sodium persulphate could be very successful. However, field study results showed that complexities such as heterogeneity of the field site and injectate density effects play a key role in the success of the remediation system.