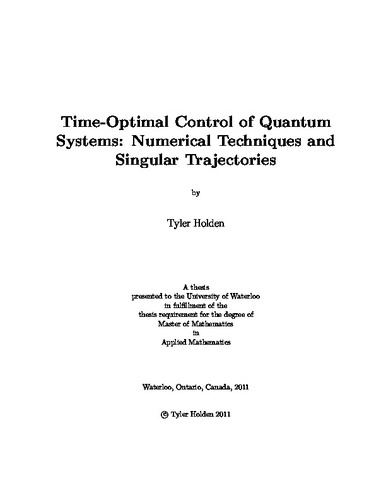 As technological advances allow us to peer into and beyond microscopic phenomena, new theoretical developments are necessary to facilitate this exploration. In particular, the potential afforded by utilizing quantum resources promises to dramatically affect scientific research, communications, computation, and material science. Control theory is the field dedicated to the manipulation of systems, and quantum control theory pertains to the manoeuvring of quantum systems. Due to the inherent sensitivity of quantum ensembles to their environment, time-optimal solutions should be found in order to minimize exposure to external sources. Furthermore, the complexity of the Schr\"odinger equation in describing the evolution of a unitary operator makes the analytical discovery of time-optimal solutions rare, motivating the development of numerical algorithms. The seminal result of classical control is the Pontryagin Maximum Principle, which implies that a restriction to bounded control amplitudes admits two classifications of trajectories: bang-bang and singular. Extensions of this result to generalized control problems yield the same classification and hence arise in the study of quantum dynamics. While singular trajectories are often avoided in both classical and quantum literature, a full optimal synthesis requires that we analyze the possibility of their existence. With this in mind, this treatise will examine the issue of time-optimal quantum control. In particular, we examine the results of existing numerical algorithms, including Gradient Ascent Pulse Engineering and the Kaya-Huneault method. We elaborate on the ideas of the Kaya-Huneault algorithm and present an alternative algorithm that we title the Real-Embedding algorithm. These methods are then compared when used to simulate unitary evolution. This is followed by a brief examination on the conditions for the existence of singular controls, as well possible ideas and developments in creating geometry based numerical algorithms.