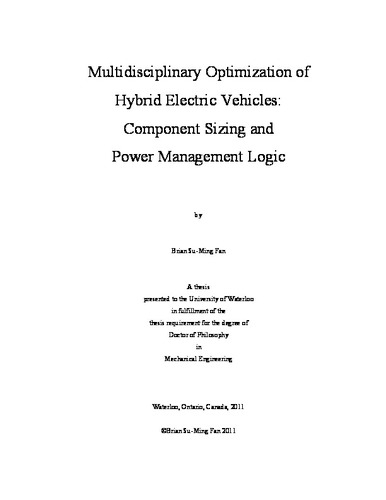 A survey of the existing literature indicates that optimization on the power management logic of hybrid electric vehicle is mostly performed after the design of the powertrain architecture or the power source components are finalized. The goal of this research is to utilize Multidisciplinary Design Optimization (MDO) to automate and optimize the vehicle’s powertrain component sizes, while simultaneously determining the optimal power management logic in developing the most cost-effective system solution. A generic, modular, and flexible vehicle model utilizing a backward-looking architecture is created using scalable powertrain components. The objective of the research work is to study the energy efficiency of the vehicle system, where the dynamics of the vehicle is not of concern; a backward-looking architecture could be used to compute the power consumption and the overall efficiency accurately while minimizing the required computing resource. An optimization software platform utilizing multidisciplinary design optimization approach is implemented containing the generic vehicle model and an optimizer of the user’s choice. The software model is created in the MATLAB/Simulink environment, where the optimization code and the powertrain component properties are implemented using m-files, and the power consumption calculations of the vehicle system are performed in Simulink. Furthermore, a feature-based optimization technique is developed with the motivation of significantly reducing the simulation run-time. To demonstrate the capabilities of the developed approach and contributions of the research, two optimization case studies are undertaken: (i) series hybrid electric vehicles, and (ii) police vehicle anti-idling system. As the first case study, a plug-in battery-only series hybrid electric vehicle with similar power components as the Chevrolet Volt is created, where the battery size and the power management logic are simultaneously optimized. The objective function of the optimizer is defined from the financial cost perspective, where the objective is to minimize the initial cost of batteries, gasoline and electricity consumption over a period of five years, and the carbon tax as a penalty function for fuel emissions. The battery-only series hybrid electric vehicle is subsequently extended to include ultracapacitors, and the optimization process is expanded to the rest of the powertrain components and power management logic. A comparison between the optimization algorithms found that only genetic algorithm (GA) was capable of finding the optimal solution during a full simulation, while simulated annealing and pattern search were not able to converge to any solution after a 24-hour period. A comparison between the full genetic algorithm optimization and the feature-based (FB) method with secondary optimization found that although the final cost function of the FB methodology is higher than that of the full GA optimization, the total simulation run-time is approximately ten times less using the FB method. The behaviour of the solutions found via both methods exhibited almost identical characteristics, further confirming the validity of the feature-based methodology. Finally, a benchmarking comparison found that with more accurate manufacturers’ component data and additional appropriate performance requirements, the proposed software platform will be capable of predicting a solution that is comparable to the Chevrolet Volt. The second case study involves optimizing an anti-idling system for police vehicles using the same optimization algorithm and generic vehicle model. The goal of the optimization study is to select an additional battery and determine the power management logic to reduce the engine idling time of a police vehicle. It is found that depending on the SOC threshold, the duration of time over which the engine is activated varies in a non-linear fashion, where local minima and maxima exist. A design study confirmed that by utilizing the anti-idling system, significant cost reduction can be realized when compared to one without the anti-idling system. A comparison between the various optimization algorithms showed that the feature-based optimization can obtain a relatively accurate solution while reducing simulation time by approximately 90%. This significant reduction in simulation time warrants the feature-based optimization technique a powerful tool for vehicle design. Due to the high cost of the electrical energy storage components, it is currently still more cost-effective to use the fossil fuel as the primary energy source for transportation. However, given the rise of fuel cost and the advancement in the electrical energy storage technology, it is inevitable that the cost of the electrical and chemical energy storage method will reach a balance point. The proposed optimization platform allows the user the capability and flexibility to obtain the optimal vehicle solution with ease at any given time in the future.