When and Why Women Apologize More than Men 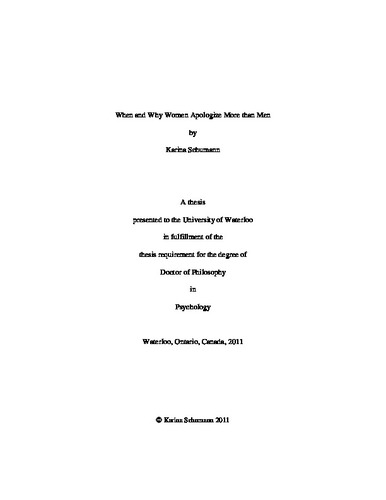 Despite wide acceptance of the stereotype that women apologize more readily than men, there is little systematic evidence to support this stereotype or its supposed bases. In the present research, I explored whether gender differences in apology behaviour occur and, if so, why they occur. In Study 1, I used daily diaries to assess everyday apologies and found that women indeed apologized more frequently than men did. I found no difference in the proportion of offenses for which men and women apologized, however, suggesting that women may apologize more often than men do because they have a lower threshold for what constitutes offensive behaviour. In Studies 2 and 5, I replicated a gender difference in apology behaviour using hypothetical offenses and obtained evidence that this difference is mediated by different judgments of offense severity. In Study 3, I adapted a signal detection paradigm and demonstrated that women exhibit a more liberal response bias in the direction of remembering an apology. In Study 4, I found that women and men similarly associate apologies with positive outcomes, and that only women endorse the stereotype that women apologize more often than men do. Finally, in Study 6, I conducted a daily diary study with romantic couples and found that, as in Study 1, women and men apologized for a similar proportion of the offenses they reported. Together, these studies suggest that a gender difference in apology frequency is caused by different judgments of severity rather than by a difference in willingness to apologize.