Playing for keeps: The Evangelical Fellowship of Canada in the public sphere, 1983-2006 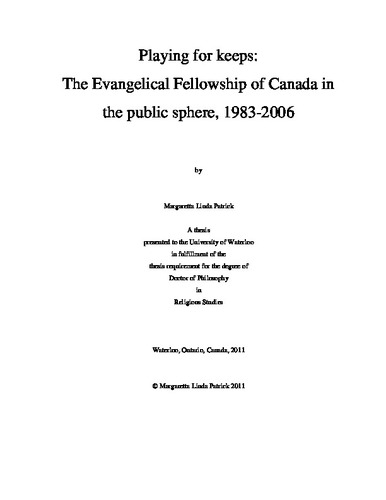 This thesis is an intellectual history of the Evangelical Fellowship of Canada (EFC) and its public policy activity from 1983 to 2006. The EFC represents many of the major evangelical Protestant denominations and organizations in Canada. Although some commentators interpret its work in light of the American Religious Right, the EFC is non-partisan and strives to be more politically moderate. This stance reflects the historical political moderation of Canadian evangelicalism. EFC leaders give direction to the evangelical community by contributing to the development of an evangelical identity that assumes political engagement, ecumenism, persuasion, and a high view of the state. Their model of engagement is politically pragmatic and emphasizes the imago Dei principle and the common good. The two concerns that contributed to evangelical political mobilization in the early 1980s were the increasing secularization of Canadian society and the privatization of religion. The EFC responded to these concerns in two ways. First, it defined secularism as intent on limiting religion in the public sphere. This interpretation enabled EFC leaders to mobilize their constituency, argue that public policy can never be religiously neutral, and insist that liberalism is not a neutral philosophy. However, it also meant that they did not critique the most secular of all spheres, the economy, or recognize the degree to which Christianity continues to enjoy cultural privileges as compared to other religions. The struggle against secularism took the EFC to Parliament Hill and into the courts. Second, the EFC called for religious groups to be at the policy making "table." This "table" is a liberal-democratic one that often requires participants to engage in discussions in a secular liberal manner. The impact of these requirements was evident in the EFC‘s participation in the public debates surrounding the definition of marriage. Many of its arguments employed liberal reasoning and de-emphasized religious convictions. Over time the EFC moved toward the social consensus about the need to protect same-sex relationships. This movement, however, did not indicate secularization on the part of the EFC. Rather, its leaders desired to develop publicly accessible arguments and thereby they contributed to civil society.