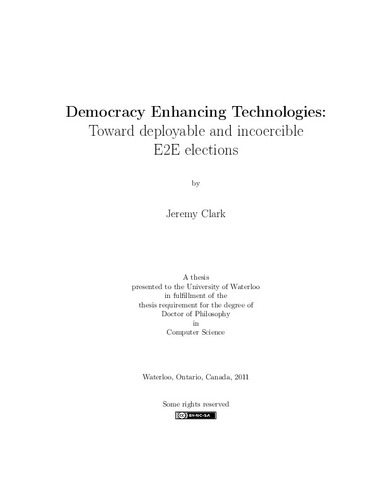 End-to-end verifiable election systems (E2E systems) provide a provably correct tally while maintaining the secrecy of each voter's ballot, even if the voter is complicit in demonstrating how they voted. Providing voter incoercibility is one of the main challenges of designing E2E systems, particularly in the case of internet voting. A second challenge is building deployable, human-voteable E2E systems that conform to election laws and conventions. This dissertation examines deployability, coercion-resistance, and their intersection in election systems. In the course of this study, we introduce three new election systems, (Scantegrity, Eperio, and Selections), report on two real-world elections using E2E systems (Punchscan and Scantegrity), and study incoercibility issues in one deployed system (Punchscan). In addition, we propose and study new practical primitives for random beacons, secret printing, and panic passwords. These are tools that can be used in an election to, respectively, generate publicly verifiable random numbers, distribute the printing of secrets between non-colluding printers, and to covertly signal duress during authentication. While developed to solve specific problems in deployable and incoercible E2E systems, these techniques may be of independent interest.