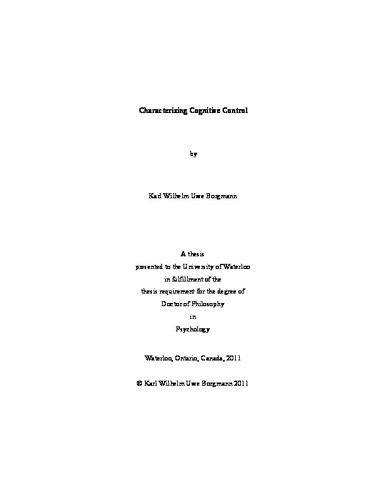 A series of experiments examined both the phenomenological nature and centrality of Cognitive Control in common cognitive paradigms. This was done primarily by employing manipulations of Congruency Proportion (CP), which are thought to modulate key aspects of Cognitive Control. Experiment 1 leads this investigation by examining the degree to which participants are consciously aware of the influence of CP in the Simon task. Here, it was observed that participants’ subjective reports of the proportion of congruent trials did not predict their actual CP effects, suggesting a non-conscious locus of CP effects. Experiments 2 and 3 followed up these preliminary findings by assessing the degree to which CP effects differentially modulate the application of Cognitive Control in two variants of the size congruity paradigm (Numerical Judgement and Physical Judgement). Here, I found that manipulations of CP significantly impacted the Numerical Judgement task, but not the Physical Judgement task, and thus seriously challenge the notion of a central and unitary Cognitive Control module. In Experiment 4, I assessed the systematic variation (via correlations) of effects from the size congruity paradigm and the Stroop task across blocks of trials at different levels of CP. In addition, I examined the degree to which the effects of CP were related to common self report measures of Cognitive Control (the Need for Cognition scale and Cognitive Failures Questionnaire). The pattern of within-task and between-task reliabilities was examined to elucidate the degree to which there is a common central control component that governs behaviour in all tasks. There was surprisingly little to no relation among the CP effects observed in these three tasks. In addition, neither participants’ engagement with the task (as indexed by theNeed for Cognition Scale), nor their propensity to have attentional slips (as indexed by the Cognitive Failures Questionnaire) predicted their performance in any way. Taken together, this set of experiments has seriously undermined the received view that CP effects arise from a central and unitary form of conscious control. These results are discussed in terms of contemporary theories of Cognitive Control.