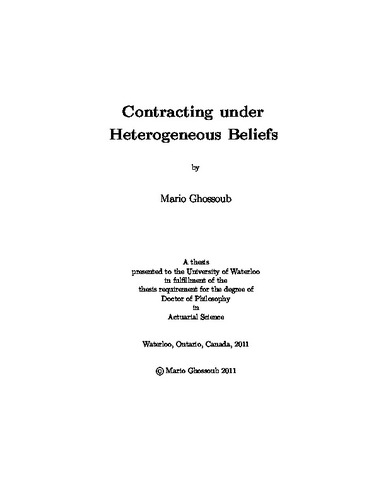 The main motivation behind this thesis is the lack of belief subjectivity in problems of contracting, and especially in problems of demand for insurance. The idea that an underlying uncertainty in contracting problems (e.g. an insurable loss in problems of insurance demand) is a given random variable on some exogenously determined probability space is so engrained in the literature that one can easily forget that the notion of an objective uncertainty is only one possible approach to the formulation of uncertainty in economic theory. On the other hand, the subjectivist school led by De Finetti and Ramsey challenged the idea that uncertainty is totally objective, and advocated a personal view of probability (subjective probability). This ultimately led to Savage's approach to the theory of choice under uncertainty, where uncertainty is entirely subjective and it is only one's preferences that determine one's probabilistic assessment. It is the purpose of this thesis to revisit the "classical" insurance demand problem from a purely subjectivist perspective on uncertainty. To do so, we will first examine a general problem of contracting under heterogeneous subjective beliefs and provide conditions under which we can show the existence of a solution and then characterize that solution. One such condition will be called "vigilance". We will then specialize the study to the insurance framework, and characterize the solution in terms of what we will call a "generalized deductible contract". Subsequently, we will study some mathematical properties of collections of vigilant beliefs, in preparation for future work on the idea of vigilance. This and other envisaged future work will be discussed in the concluding chapter of this thesis. In the chapter preceding the concluding chapter, we will examine a model of contracting for innovation under heterogeneity and ambiguity, simply to demonstrate how the ideas and techniques developed in the first chapter can be used beyond problems of insurance demand.