Policy-Driven Framework for Static Identification and Verification of Component Dependencies 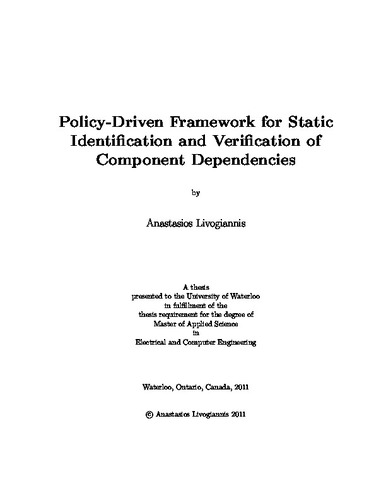 Software maintenance is considered to be among the most difficult, lengthy and costly parts of a software application's life-cycle. Regardless of the nature of the software application and the software engineering efforts to reduce component coupling to minimum, dependencies between software components in applications will always exist and initiate software maintenance operations as they tend to threaten the "health" of the software system during the evolution of particular components. The situation is more serious with modern technologies and development paradigms, such as Service Oriented Architecture Systems and Cloud Computing that introduce larger software systems that consist of a substantial number of components which demonstrate numerous types of dependencies with each other. This work proposes a reference architecture and a corresponding software framework that can be used to model the dependencies between components in software systems and can support the verification of a set of policies that are derived from system dependencies and are relative to the software maintenance operations being applied. Dependency modelling is performed using configuration information from the system, as well as information harvested from component interface descriptions. The proposed approach has been applied to a medium scale SOA system, namely the SCA Travel Sample from Apache Software Foundation, and has been evaluated for performance in a configuration specification related to a simulated SOA system consisting to up to a thousand web services offered in a few hundred components.