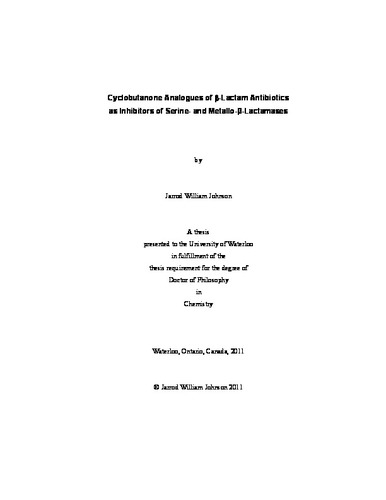 Bacterial resistance to antibiotics is an emerging epidemic throughout the world and there is a desperate need for new antibiotics and new strategies to maintain the effectiveness of current agents. β-Lactams, such as the penicillins and cephalosporins, have been the most important class of antibiotic for several decades and represent half of the global antibacterial market, but the continued use of β-lactams is threatened by β-lactamases, enzymes that efficiently inactivate β-lactams through hydrolysis. Class A, C, and D β-lactamases use an active-site serine residue for hydrolysis and achieve turnover through an acylenzyme intermediate while the class B metallo-β-lactamases (MBLs) use a zinc-bound hydroxide as the active-site nucleophile. Two successful approaches to combat β-lactamase-mediated resistance have involved the development of β-lactam antibiotics which bind poorly to β-lactamases and the combination of β-lactams with β-lactamase inhibitors. These strategies have been effective for overcoming resistance due to class A β-lactamases, but the ever-increasing prevalence of extended-spectrum β-lactamases (ESBLs), metallo-β-lactamases, and carbapenemases compromises the effectiveness of current penicillins, cephalosporins, carbapenems, and mechanism-based β-lactamase inhibitors. Cyclobutanone analogues of β-lactam antibiotics were explored in the early 1980s as potential inhibitors of β-lactamases and D-Ala-D-Ala transpeptidases, but simple analogues showed only weak inhibitory activity and this approach was subsequently abandoned. The increasing threat of multidrug-resistant β-lactamase-producing organisms in recent years, however, has inspired a re-evaluation of these inhibitors since cyclobutanones have the potential to exhibit broad-spectrum inhibition of both serine- and metallo-β-lactamases through the formation of enzyme-bound hemiketals or hydrates. 7,7-Dichloro-2-thia-bicyclo[3.2.0]heptan-6-one-4-carboxylic acid (65), a dichlorocyclobutanone that had shown modest inhibition of the class B and D β-lactamases IMP-1 and OXA-10 in earlier work in this laboratory, was prepared in an efficient seven-step sequence from triethyl phosphonoacetate (103) with an overall yield of 28%. Initial efforts to improve upon the potency of the cyclobutanones involved functionalization at C3 and a highly stereoselective chlorination with sulfuryl chloride provided the 3α-chloro derivative 117α in nearly quantitative yield. Elimination of HCl from 117α was achieved under a variety of conditions and 3-alkoxy derivatives were prepared from 117α through diastereoselective substitution reactions with alcohols. Cyclobutanones with 3β-OR substituents were found to favour an endo envelope conformation while the 3α-OR derivatives adopt the exo envelope conformation. Evidence from X-ray crystal structures and ab initio molecular orbital calculations suggests that an anomeric effect contributes to the large conformational preference of the tetrahydrothiophene ring that favours the 3-alkoxy substituent in an axial orientation. In addition, the conformation of the bicyclic system was found to have a dramatic effect on the tendency of the cyclobutanone to undergo hemiketal formation. Cyclobutanone analogues of penicillins, including 3-alkoxy derivatives, and cyclobutanone analogues of penems were evaluated against class A, B, C, and D β-lactamases and found to be moderate inhibitors of KPC-2, IMP-1, GC1, and OXA-10. The cyclobutanones found to be most potent were those which are hydrated to a larger extent in aqueous solution. Dichlorocyclobutanones were found to be better inhibitors than dechlorinated cyclobutanones and a 3α-methoxy derivative 152α, which favours the exo envelope conformation in which the C4 carboxylate is equatorial, was found to be a better inhibitor than cyclobutanones that favour the endo envelope conformation. A 3,4-unsaturated penem analogue, 153, showed comparable potency to that of 152α and molecular models of enzyme-inhibitor complexes indicate that an equatorial carboxylate is required for binding to β-lactamases. An X-ray crystal structure of 152α bound to the class D β-lactamase OXA-10 confirms that a serine hemiketal is formed in the active site and that the inhibitor adopts the exo envelope. The biochemical data described above demonstrate that cyclobutanones can indeed act as inhibitors of serine- and metallo-β-lactamases and these cyclobutanones represent the first class of reversible inhibitors to show moderate inhibition of all four classes of β-lactamase. Although the inhibitory potency of these compounds is modest (low micromolar IC50 values), penem analogue 153 was able to enhance the potency of meropenem against carbapenem-resistant MBL-producing clinical isolates of Chryseobacterium meningosepticum and Stenotrophomonas maltophilia and the synergy demonstrated in these antimicrobial assays is encouraging. Synthetic studies toward other C3-alkyl and C3-thioalkyl-substituted inhibitors are described and the design and synthesis of C7-monochloro- and 7α-hydroxymethyl-7β-chloro cyclobutanone derivatives is presented.