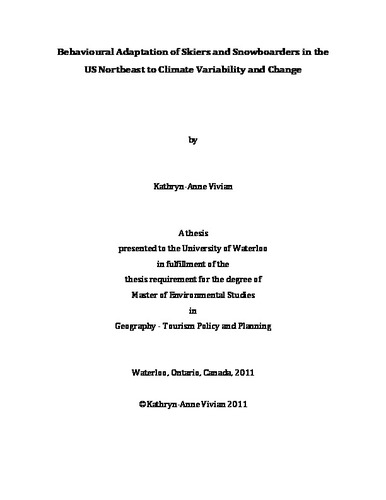 Climate change has been referred to as the ‘greatest challenge to the sustainability of the global tourism industry in the 21st century’ (UNWTO-UNEP-WMO, 2008). As a result, climate change is one of the most widely discussed environmental and sustainable development topics today. The winter tourism industry has been repeatedly identified as being vulnerable to climate change. The implications for winter tourism include a lack of snow in winter sport destinations, increased snowmaking and operational costs, shorter winter sports season, decreased visitation, and the potential for a loss of ski area operations. The intent of this study was to understand the adaptive behaviours of skiers/snowboarders taken in response to climate conditions. More specifically the objectives of this research were: to examine how skiers/snowboarders have responded to changing snow conditions in the past as well as how they may react in the future, to understand the role of substitution (time, place, activity) within specific behavioural responses to both past and future snow conditions, and to examine the extent to which activity commitment and place loyalty influence climate-induced behavioural change. Skier/snowboarder surveys were distributed at seven resorts in the New England states of Vermont and New Hampshire during the winter months of February and March 2010. A total of 572 surveys was collected and analyzed. The research findings revealed that skiers and snowboarders in New England are very loyal to their preferred winter resorts and are extremely loyal to the New England region. Only a small percentage of respondents said that they would travel outside New England to find better snow conditions. The level of a skier’s/snowboarder’s involvement in the sport, as well as their level of destination loyalty were also found to be important determinants of substitution behaviors. As climate change causes more significant changes to the mountain landscape and snow conditions, understanding how different tourist segments react to climate change and related environmental change is important for various tourism stakeholders: ski resort managers, nearby communities and also states that are dependent on this winter tourism revenue.

Kathryn-Anne Vivian (2011). Behavioural Adaptation of Skiers and Snowboarders in the US Northeast to Climate Variability and Change. UWSpace. http://hdl.handle.net/10012/5980