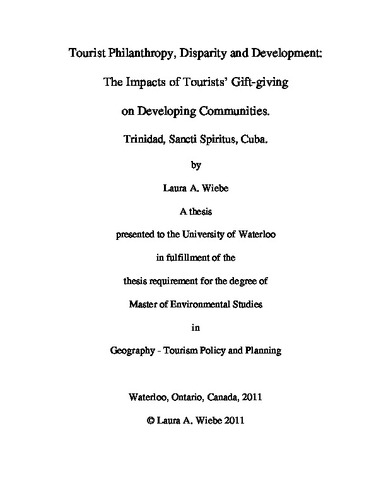 For more than a decade tourists originating in developed nations have been giving various gifts to locals of tourism communities in developing nations. This occurrence is commonly associated with the Caribbean, and is particularly well known to occur in Cuba. Tourism has often been adopted as a part of economic development strategies of developing nations, however due to a lack of studies on tourists’ philanthropic gift-giving it is unclear how the occurrence affects both human and economic development, and likewise its impacts such as possibilities of population disparity. There are current restrictions in Cuba which forbid locals from accepting the gifts of international tourists (Taylor & McGlynn 2009; Mesa-Lago 2005), however the island’s unique need for material goods seems to over-rule this policy. The implication herein indicates benefits to accepting gifts from tourists. Tourism employees most frequently come in contact with tourists and the potential of gift receipts by tourism employees is heightened. This in turn carries implications of social disparities amongst the population resulting from unequal gift receipts by tourism employees. Furthermore, current research suggests that complex social relationships are created through gift-giving yet little is understood within the context of tourist-to-local community member. The goal of this thesis is to determine whether international tourist philanthropic gift-giving contributes to social disparity within a local community as well as its affects on human and economic development. This has been achieved through case study research from a mixed-methods approach in Trinidad, Sancti Spirtus, Cuba. The results of this research point to significant economic gains and improvement in access-to-material-goods through tourists’ gift-giving, which in turn have been found to contribute to economic development. However, the external nature of tourists’ gift-giving limits using the phenomenon as a reliable tool for economic development. Impacts on human development are not as clearly defined. Although tourists’ gift-giving contributes to some aspects of human development, the phenomenon cannot be considered to contribute to overall human development. Although population disparity was found to be an impact of tourists’ philanthropic gift-giving, community members viewed the occurrence as a positive benefit of tourism. The policy in Cuba restricting locals from accepting tourists’ gifts has been largely ineffective as this type of economic gain was found to be well integrated in the informal economy. The general public is largely unaware of the policy and it is likely Cubans will continue to accept tourists’ gifts. Although this research has revealed interesting insight regarding tourists’ philanthropic gift-giving much remains to be known of its impacts and several recommendations for future studies are suggested.