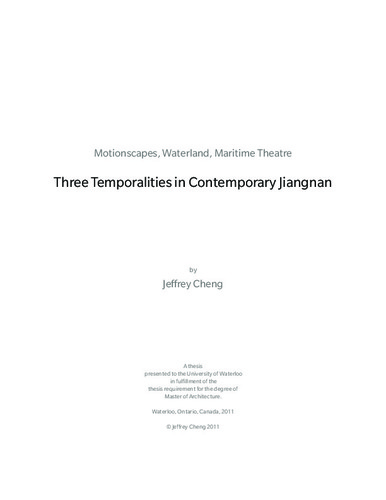 Jiangnan is on the brink of revolution: a network of bullet train lines will re-territorilize this region of China, including Shanghai, drawing its 80 million inhabitants within a single hour’s commute of one another. From the train, the boundaries between Jiangnan’s ancient cities, villages, and countryside appear to dissolve into a momentary smear of colour. At the very moment the earth has shrunk by the bullet train, Jiangnan’s new mega-city status will erode a sense of community rooted in long stable demarcations of place. The humanity that endures will likely be atomized, lost in a vast, blurred, and indecipherable landscape that has sacrificed community for the high-speed design of a relentless modernity. Fuciao Cun Village, which stands at the geographic centre of Jiangnan, is being dismantled to accommodate explosive urban growth. Only the abandoned temple remains. The surviving temple is imagined to harbour three voices, each offering an alternate vision speed, space and time. Motionscapes studies the scene from the bullet train window and the power of the temple as a ruin, standing still in a landscape of radical flux. Waterland re-tools the temple site to choreograph new economies and transportation networks that respond and reveal a topography continuously animated by water. Finally, Maritime Theatre turns to classical Jiangnan gardens, cities, and temples for tactics of place-making. These techniques attempt to evoke collective memory to waken a dormant yet resilient zeitgeist at the uprooted site. Motionscapes, Waterland, and Maritime Theatre each offer an architectural intervention, the temple as ruin, waterworks and brickworks, and theatre. In sum, the three proposals at Fuciao Cun Temple are layered to project a fuller and inclusive experience of place onto a broader landscape, otherwise derationed, homogenized, and sacrificed by a manically technologic modernity.