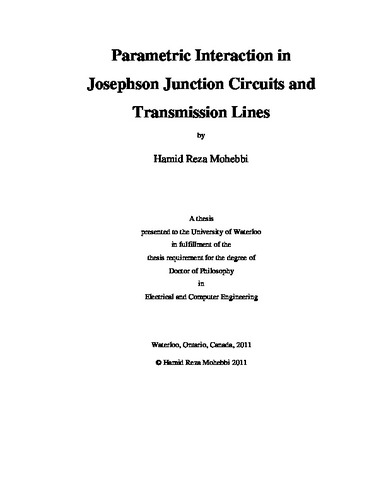 This research investigates the realization of parametric amplification in superconducting circuits and structures where nonlinearity is provided by Josephson junction (JJ) elements. We aim to develop a systematic analysis over JJ-based devices toward design of novel traveling-wave Josephson parametric amplifiers (TW-JPA). Chapters of this thesis fall into three categories: lumped JPA, superconducting periodic structures and discrete Josephson transmission lines (DJTL). The unbiased Josephson junction (JJ) is a nonlinear element suitable for parametric amplification through a four-photon process. Two circuit topologies are introduced to capture the unique property of the JJ in order to efficiently mix signal, pump and idler signals for the purpose of signal amplification. Closed-form expressions are derived for gain characteristics, bandwidth determination, noise properties and impedance for this kind of parametric power amplifier. The concept of negative resistance in the gain formulation is observed. A design process is also introduced to find the regimes of operation for gain achievement. Two regimes of operation, oscillation and amplification, are highlighted and distinguished in the result section. Optimization of the circuits to enhance the bandwidth is also carried out. Moving toward TW-JPA, the second part is devoted to modelling the linear wave propagation in a periodic superconducting structure. We derive closed-form equations for dispersion and s-parameters of infinite and finite periodic structures, respectively. Band gap formation is highlighted and its potential applications in the design of passive filters and resonators are discussed. The superconducting structures are fabricated using YBCO and measured, illustrating a good correlation with the numerical results. A novel superconducting Transmission Line (TL), which is periodically loaded by Josephson junctions (JJ) and assisted by open stubs, is proposed as a platform to realize a traveling-wave parametric device. Using the TL model, this structure is modeled by a system of nonlinear partial differential equations (PDE) with a driving source and mixed-boundary conditions at the input and output terminals, respectively. This model successfully emulates parametric and nonlinear microwave propagation when long-wave approximation is applicable. The influence of dispersion to sustain three non-degenerate phased-locked waves through the TL is highlighted. A rigorous and robust Finite Difference Time Domain (FDTD) solver based on the explicit Lax-Wendroff and implicit Crank-Nicolson schemes has been developed to investigate the device responses under various excitations. Linearization of the wave equation, under small-amplitude assumption, dispersion and impedance analysis is performed to explore more aspects of the device for the purpose of efficient design of a traveling-wave parametric amplifier. Knowing all microwave characteristics and identifying different regimes of operation, which include impedance properties, cut-off propagation, dispersive behaviour and shock-wave formation, we exploit perturbation theory accompanied by the method of multiple scale to derive the three nonlinear coupled amplitude equations to describe the parametric interaction. A graphical technique is suggested to find three waves on the dispersion diagram satisfying the phase-matching conditions. Both cases of perfect phase-matching and slight mismatching are addressed in this work. The incorporation of two numerical techniques, spectral method in space and multistep Adams-Bashforth in time domain, is employed to monitor the unilateral gain, superior stability and bandwidth of this structure. Two types of functionality, mixing and amplification, with their requirements are described. These properties make this structure desirable for applications ranging from superconducting optoelectronics to dispersive readout of superconducting qubits where high sensitivity and ultra-low noise operation is required.