Multiscale modelling of snow depth over an agricultural field in a small catchement in southern ontario, canada. 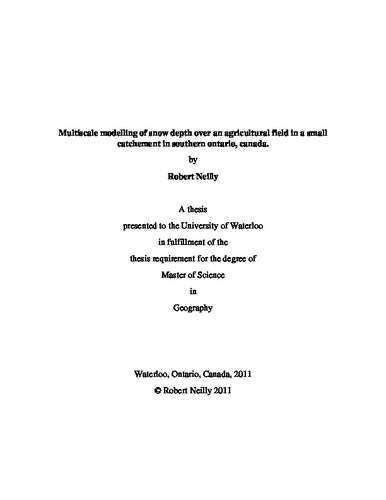 Snow is a common overlying surface during winter-time and the redistribution of snow by wind is a very important concept for any hydrological research project located within the cryosphere. Wind redistributes snow by eroding it from areas of high wind speed, such as ridge tops and windward slopes, and deposits it in areas of lower wind speeds, such as the lees of ridge tops, vegetation stands, and topographic depressions. The accurate modelling of blowing snow processes such as erosion, deposition, and sublimation have proven to be rather problematic. The largest issue that many modellers must deal with is the accurate collection of solid precipitation throughout the winter season. Without this, incorrect energy and mass balances can occur. This thesis makes use of a new method of acquiring solid precipitation values through the use of an SR50a ultrasonic snow depth sensor and then incorporates it into a version of the Cold Regions Hydrological Model (CRHM) which includes the Prairie Blowing Snow Model (PBSM) and the Minimal Snowmelt Model (MSM) modules. The model is used to simulate seasonal snow depth over an agricultural field in southern Ontario, Canada and is driven with half-hourly locally acquired meteorological data for 83 days during the 2008-2009 winter season. Semi-automated snow surveys are conducted throughout the winter season and the collected in situ snow depth values are compared to the simulated snow depth values at multiple scales. Two modelling approaches are taken to temporally and spatially test model performance. A lumped approach tests the model‟s ability to simulate snow depth from a small point scale and from a larger field scale. A distributed approach separates the entire field site into three hydrological response units (HRUs) and tests the model‟s ability to spatially discretize at the field scale. HRUs are differentiated by varying vegetation heights throughout the field site. Temporal analysis compares the simulated results to each day of snow survey and for the entire field season. Model performance is statistically analyzed through the use of a Root Mean Square Difference (RMSD), Nash-Sutcliffe coefficient (NS), and Model Bias (MB). Both the lumped and distributed modelling approaches fail to simulate the early on-set of snow but once the snow-holding capacities are reached within the field site the model does well to simulate the average snow depth during the latter few days of snow survey as well as throughout the entire field season. Several model limitations are present which prevent the model from incorporating the scaling effects of topography, vegetation, and man-made objects as well as the effects from certain energy fluxes. These limitations are discussed further.

R. Michael A. Neilly (2011). Multiscale modelling of snow depth over an agricultural field in a small catchement in southern ontario, canada.. UWSpace. http://hdl.handle.net/10012/5970