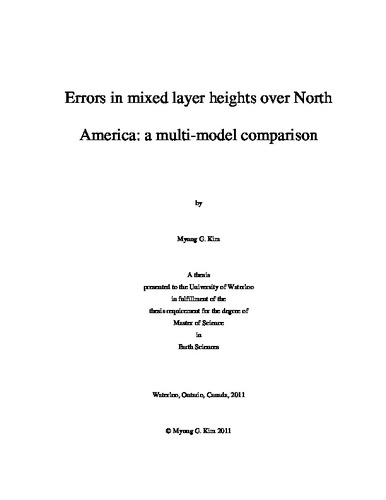 Vertical mixing is an important process that relates surface fluxes to concentrations of pollutants and other chemical species in the atmosphere. Errors in vertical mixing have been identified as a major source of uncertainties in various atmospheric modeling efforts including tracer transport, weather forecasting, and regional climate simulation. This thesis aims to quantify uncertainties in model-derived mixed layer heights (zi) over North America through direct comparisons between radiosonde observations and four models at different months of the year 2004 through the bulk Richardson number method. Results of this study suggest that considerable errors in zi exist throughout the region with the spatial and temporal variations of the errors differ significantly among the selected models. Over all, errors in zi were larger in global models than in the limited area mesoscale models, and the magnitude of the random error was two times larger than the bias. Notably, spatial regions of with extremely large positive biases correspond to those with especially large random errors. The biases and random errors, however, were not correlated linearly nor can be easily used to predict each other. Uncertainties in model-derived zi were attributed, through errors in the bulk Richardson number, to temperature and horizontal winds. Errors in both horizontal winds and temperatures were found contributing more or less the same to uncertainties in zi, with relative errors in both variables being the greatest in the lowest part of the troposphere. Lastly, independent observations from the cooperative profiler network suggest that data assimilation did not add qualitative advantages for the comparisons presented in this study. The mixed layer height uncertainties demonstrated in this study may provide a guide for selecting a model to simulate regional scale atmospheric transport and for interpreting flux estimation and inversions studies.