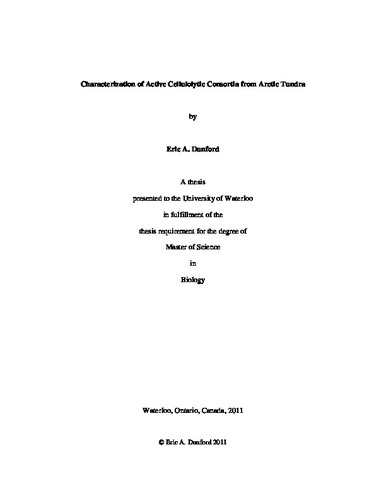 The consortia of microorganisms responsible for the hydrolysis of cellulose in situ are at present poorly characterized. Nonetheless, the importance of these communities is underscored by their capacity for converting biomass to greenhouse gases such as carbon dioxide and methane. The metabolic capacities of these organisms is particularly alarming considering the volume of biomass that is projected to re-enter the carbon cycle in Arctic tundra soil environments as a result of a warming climate. Novel cold-adapted cellulase enzymes also present enormous opportunities for a broad range of industries. DNA stable-isotope probing (DNA-SIP) is a powerful tool for linking the phylogenetic identity and function of cellulolytic microorganisms by the incorporation of isotopically labelled substrate into nucleic acids. By providing 13C-enriched glucose and cellulose to soil microcosms, it was possible to characterize the communities of microorganisms involved in the metabolism of these substrates in an Arctic tundra soil sample from Resolute Bay, Canada. A protocol for generating 13C-enriched cellulose was developed as part of this thesis, and a visual DNA-SIP protocol was generated to demonstrate the experimental outline. Denaturing gradient gel electrophoresis (DGGE) and 16S rRNA clone libraries were used to visualize changes in community structure and to identify prevalent, active phylotypes in the SIP incubations. Notably, predominant phylotypes changed over time and clustered based on substrate metabolism. Labelled nucleic acids identified by sequenced DGGE bands and 16S rRNA gene clone libraries provided converging evidence indicating the predominance of Clostridium and Sporolactobacillus in the 13C-glucose microcosms, and Betaproteobacteria, Bacteroidetes, and Gammaproteobacteria in the 13C-cellulose microcosms. Active populations consuming glucose and cellulose were distinct based on principle coordinate analysis of “light” and “heavy” DNA. A large portion of the recovered sequences possessed no close matches in the GenBank database, reflecting the paucity of data on these communities of microorganisms.