Remembering the River: The Retrieval of Rome's Forgotten Relationship with the Tiber 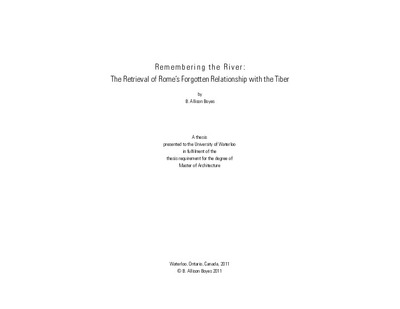 Ever since its founding, Rome has been vulnerable to the swelling waters of its Tiber River. This river was so important to the city that it was a defining character in Rome’s history for over two thousand years. However, this river-city relationship would be suddenly severed in the late 19th century as Rome was declared the Italian capital. And, with the creation of the capital, came the creation of the river walls. While this new infrastructure safeguarded the city from future flooding, it razed the relationship between the city and its river. It lost its use as a commercial trade route, transportation system and leisure landscape, and before long the Tiber was forgotten. This thesis proposes a design intervention at Rome’s historic river-city site, the Porto di Ripetta. Once the physical and symbolic gateway to the city, the Ripetta is presently the most disconnected site along the Tiber River. Not only does the proposed project aim to synergistically unite a series of complex archaeological layers from antiquity to present-day, it also aspires to reconnect the city to its historical relationship with its river, introduce another layer within Rome’s transportation network, and expand the city’s cultural agenda along its underutilized continuous corridor. The introduction of river-based programme is logical when created within a series of design solutions that both recognize and address the temporal nature of the riverscape. Through in-depth historical analysis, this thesis examines the complexities of the Tiber River’s existence and analyzes its sociological, physical and political importance to the Eternal City. This understanding of the Tiber River’s unique qualities reveals tangible opportunities for new public spaces connected the potential of the Tiber as part of an expanded network of new public transportation, leisure landscapes, and cultural institutions.

B. Allison Boyes (2011). Remembering the River: The Retrieval of Rome's Forgotten Relationship with the Tiber. UWSpace. http://hdl.handle.net/10012/5961