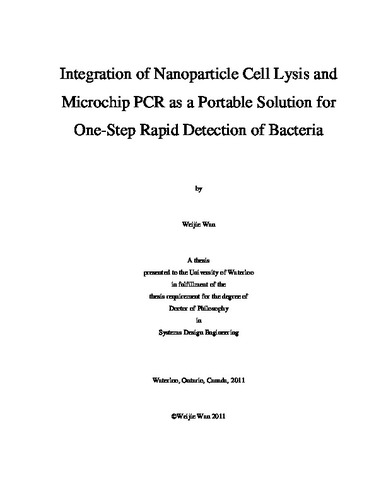 Bacteria are the oldest, structurally simplest, and most abundant forms of life on earth. Its detection has always been a serious question since the emerging of modern science and technology. There has been a phenomenal growth in the field of real-time bacteria detection in recent years with emerging applications in a wide range of disciplines, including medical analysis, food, environment and many more. Two important analytical functions involved in bacteria detection are cell lysis and polymerase chain reaction (PCR). Cell lysis is required to break cells open to release DNA for use in PCR. PCR is required to reproduce millions of copies of the target genes to reach detection limit from a low DNA concentration. Conventionally, cell lysis and PCR are performed separately using specialized equipments. Those bulky machines consume much more than needed chemical reagents and are very time consuming. An efficient, cost-effective and portable solution involving Nanotechnology and Lab-on-a-Chip (LOC) technology was proposed. The idea was to utilize the excellent antibacterial property of surface-functionalized nanoparticles to perform cell lysis and then to perform PCR on the same LOC system without having to remove them from the solution for rapid detection of bacteria. Nanoparticles possess outstanding properties that are not seen in their bulk form due to their extremely small size. They were introduced to provide two novel methods for LOC cell lysis to overcome problems of current LOC cell lysis methods such as low efficiency, high cost and complicated fabrication process. The first method involved using poly(quaternary ammonium) functionalized gold and titanium dioxide nanoparticles which were demonstrated to be able to lyse E. coli completely in 10 minutes. The idea originated from the excellent antibacterial property of quaternary ammonium salts that people have been using for a long time. The second method involved using titanium dioxide nanoparticles and a miniaturized UV LED array. Titanium dioxide bears photocatalytic effect which generates highly reactive radicals to compromise cell membranes upon absorbing UV light in an aqueous environment. A considerable reduction of live E. coli was observed in 60 minutes. The thesis then evaluates the effect of nanoparticles on PCR to understand the roles nanoparticles play in PCR. It was found that gold and titanium dioxide nanoparticles induce PCR inhibition. How size of gold nanoparticles affected PCR was studied as well. Effective methods were discovered to suppress PCR inhibition caused by gold and titanium dioxide nanoparticles. The pioneering work paves a way for the integration of nanoparticle cell lysis and LOC PCR for rapid detection of bacteria. In the end, an integrated system involving nanoparticle cell lysis and microchip PCR was demonstrated. The prototyped system consisted of a physical microchip for both cell lysis and PCR, a temperature control system and necessary interface connections between the physical device and the temperature control system. The research explored solutions to improve PCR specificity in a microchip environment with gold nanoparticles in PCR. The system was capable of providing the same performance while reducing PCR cycling time by up to 50%. It was inexpensive and easy to be constructed without any complicated clean room fabrication processes. It can find enormous applications in water, food, environment and many more.